Ned Quartermaine was recently elected mayor of Port Charles on GENERAL HOSPITAL, and his portrayer, Wally Kurth, took to social media to chat with fans about the recent storyline and the beloved co-star he hopes will return for the next election! Many viewers were disappointed when Laura dropped out of the race to go take care of Spencer, and hope that actress Genie Francis will come back to the soap so she can run against Ned the next time! “I hope so, too,” Kurth confided on Twitter. “I love working with Genie. And I hope she returns.”

Although some hoped Alexis would beat Ned out for mayor, Kurth believes his alter ego is perfect for the job. “I think Ned is a gatekeeper,” he declared. “It’s in his DNA. Mayors, or any public servant for that matter, are gatekeepers at heart. Right?” But the actor doesn’t see himself running for any kind of office in real life like some celebrities do. “I always ran for office in school,” Kurth recalled. “I’m very involved in following politics. I was actually a teenage Republican growing up in Montana. But now, partisan politics are so toxic, so unpopular, I don’t think I could run for anything unless it was non-partisan. I would only run for Mayor. It’s non-partisan. My primary focus would be education, education, and education.” 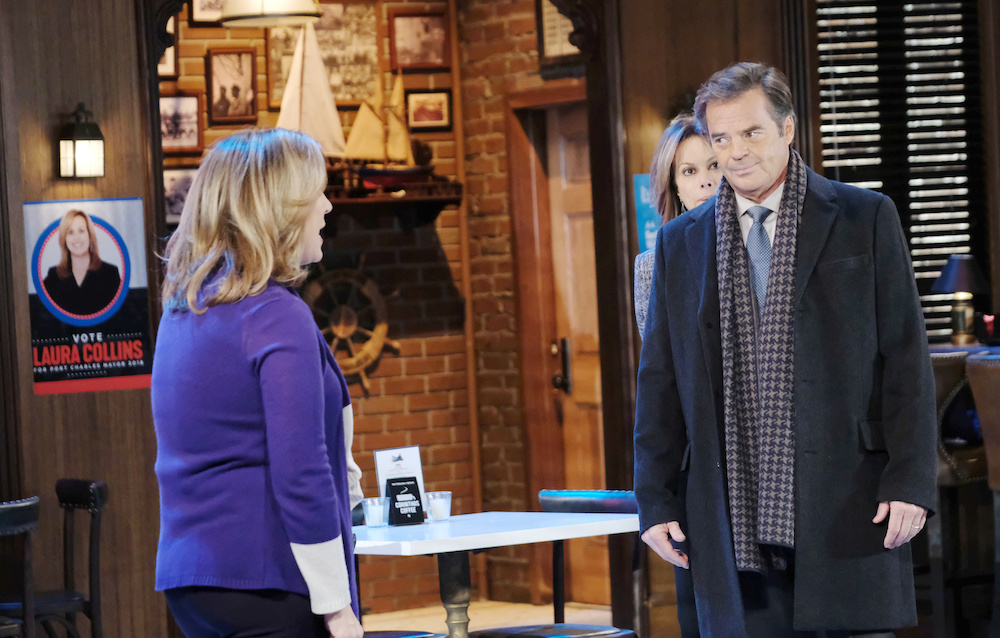 Ned may have been able to beat Alexis, but Laura would’ve been a tougher opponent! (Photo Credit: ChrisD/jpistudios.com)

Ned’s decision to run for mayor took some viewers by surprise, but Kurth didn’t think it was that out of the blue. “I guess it makes sense on some level, that Ned would run for public office,” he mused. “He always felt comfortable on stage, with a guitar in his hands. He’s not afraid to take a stand and bring something to Port Charles, a city he loves.

“And let me just say, as the actor,” he added, “my favorite line of the [episode], a line that I feel is the most important sentiment in today’s politics, in today’s world: ‘With all our differences, we have much more that unites us than divides us.’”

Although Ned had already been elected by the end of Kurth’s twitter chat, Kurth closed out the session with a campaign promise to the fans. “I promise to be the best mayor ever!” he announced. “In the history of GH and all the soaps from all time. Is that too much?”

Stay tuned to find out just how Ned does running Port Charles, and for more GH news, keep reading the ABC edition of Soaps In Depth magazine!

What Happened to Laura on GH

Lindze Letherman Opens up About Life After GH