Although Patricia Bethune was reluctant to share spoilers for upcoming episodes of GENERAL HOSPITAL, she did take advantage of a special Twitter Q&A with fans to reveal that she’s having a blast playing Nurse Mary Pat and tormenting Carly at Ferncliff. So much so that she hopes it can continue for a while! “I would love to stay on,” the actress admitted. “Hopefully, there’s a great new Ferncliff twist coming!”

And for the GH fans who loathe Mary Pat, that just goes to show what a great job the lovely actress is doing playing the nasty character. “I haven’t had many opportunities to play evil,” Bethune confided, “and I am having a wonderful time.” But she also took the time to explain the nurse’s attitude towards her patient. “Well, Mary Pat doesn’t know Carly is innocent,” she argued. “She believes Carly threw a pregnant woman down the stairs. the dislike has to do with the push back from Carly and how much extra time it takes to control her within Mary Pat’s world.” 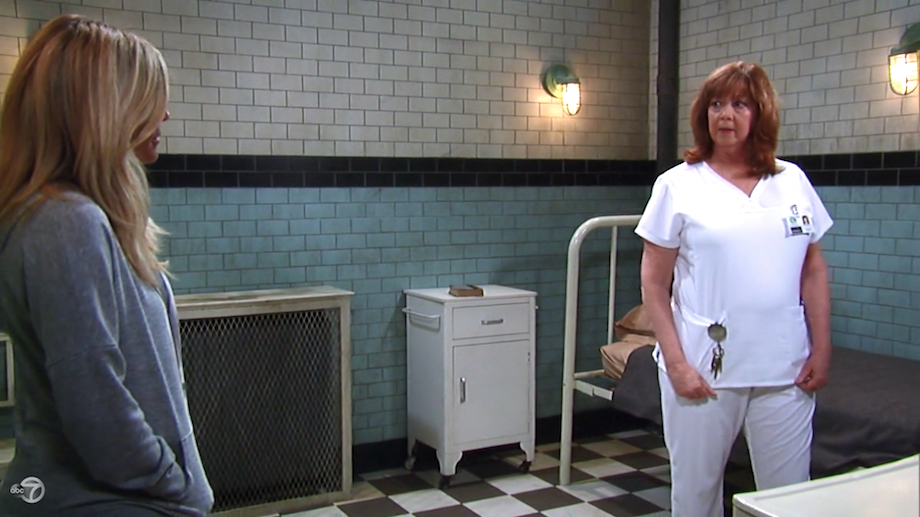 Why is Mary Pat so desperate to keep Carly away from the patient on the other side of the wall? (Photo Credit: ABC)

Of course, the big mystery right now is who is the patient in the other room who keeps trying to communicate with Carly, and Bethune admits she’s excited for the big reveal. “I don’t know who is in the room yet myself,” she confessed, “but I hear it will be a fun surprise!”

And despite how much fun she is having working with Laura Wright, Bethune is eager to see Carly get out of Ferncliff. “I’m looking forward to Caroline turning the tables on Mary Pat,” she declared, adding, “although she is just doing her job!” But it’s not just Carly she’s going to have to watch out for. “I’m worried what Sonny will do when he hears exactly how poor Caroline was treated,” Bethune teased. “It would be entertaining!”

Stay tuned to see what’s next for Mary Pat, and for more on your favorite GH stars, keep reading the ABC edition of Soaps In Depth magazine!