It’s understandable if viewers think Rita on GENERAL HOSPITAL looks familiar, because not only has actress Suanne Spoke appeared in countless films and television series during her career, but the character of Rita Ferlito has already been on GH before!

Eagle-eyed fans recognized Mike’s girlfriend, Rita, as the bartender that Jason encountered in New York City as the mysterious Patient Six back in October of 2017. Having escaped the Russian clinic with Ava’s help, Jason stowed away on a ship and ended up in the Big Apple on his way home to Port Charles. After a couple of goons posing as cops entered the bar looking for Jason, Rita helped him hide in the back and got rid of them. Grateful, Jason gifted her with the “lucky” watch that Huxley had given him on the ship. 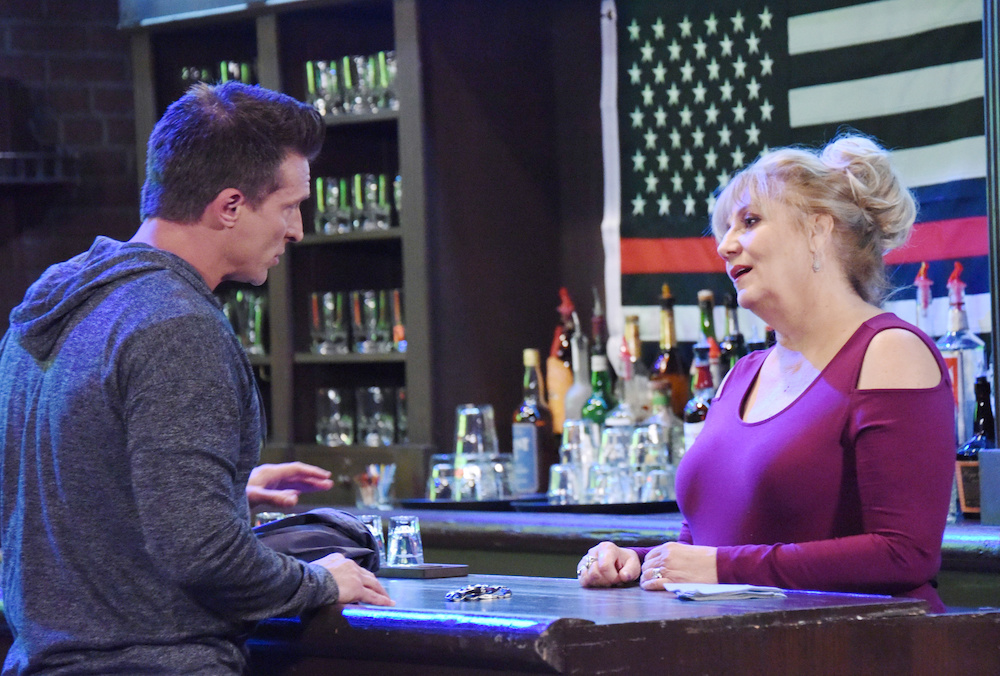 Rita helped Jason out of a jam when he was running for his life! (Photo Credit: XJJohnson/jpistudios.com)

Rita reappeared in the Feb. 5 episode as Mike’s girlfriend who Sonny first encountered while looking for his father. She has urged Mike to return to Port Charles with Sonny for a little vacation, but couldn’t come along as she had to work. But now that Rita has popped upstate to check on Mike, it would certainly be surprising for her and Jason to run into each other again! Plus, what if Huxley’s “lucky” watch still holds some clue to Jason’s mysterious disappearance and imprisonment?

Spokes has been a working actress since the ‘80s, making appearances on shows like L.A. LAW, SEINFELD, BEVERLY HILLS 90210, STEP BY STEP, and PARTY OF FIVE. She also played Ann B. Davis in the TV movie Growing up Brady, which also starred fellow GH-er Carly Schroeder (ex-Serena) as Susan Olsen! On the big screen, Spokes can be seen in War of the Worlds, Whiplash, and Crazylove. Most recently, the actress had a recurring role as Karen Barnes on the ABC Family series SWITCHED AT BIRTH.

Stay tuned as the story continues to develop, and for more GH casting news, keep reading the ABC edition of Soaps In Depth magazine.

Everything You Need to Know About Sonny’s Father, Mike Corbin