If Ridge has anything to do with it, Quinn’s days as Eric’s wife are numbered in these spoilers from THE BOLD & THE BEAUTIFUL!

“You two are family now,” Eric tells Quinn and Ridge as the two exchange nervous glances. “You need to start appreciating one another.” But the look on Quinn’s face would seem to indicate she feels guilty about appreciating Ridge a little too much! At the office, Liam is eager to get Quinn out of all of their lives and presses Ridge for details on his plan to oust her. “I will do whatever I have to do to get Quinn in a compromising situation,” Ridge promises. But how far is he really willing to go to accomplish his goal?

Back at the house, Eric declares, “I know my wife. I trust her. I think that after today, she could prove to the world who she really is.” Eric might be disappointed, however, if Ridge’s devious scheme succeeds and Quinn is exposed for who she really is! 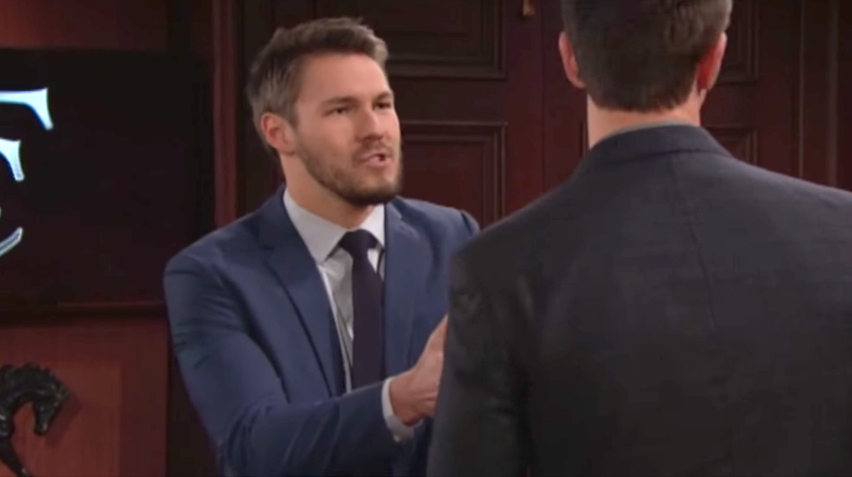 Liam warns his brother to give up on Steffy! (Photo Credit: CBS)

Wyatt and Liam continue to clash over the woman they both love as Wyatt refuses to give up hope of repairing his marriage to Steffy. “We are still married,” he reminds his brother. “I am her husband.” Liam responds, “Yes. Until the divorce goes through.” But Wyatt counters, “If it ever does! Thank you.” Is Wyatt right in thinking he might still have a chance, or should he listen to Liam and move on with his life?