We caught up with celebrity news blogger Perez Hilton from his dressing room at THE BOLD & THE BEAUTIFUL the day he taped his scenes as Reverend Murphy, which will air Friday, Sept. 23, and Monday, Sept. 26.

“This is actually the second time I’ve played a reverend,” reveals the internet personality, who studied drama at NYU before building his successful online career. “The first time was in a gay comedy, but I’m not playing it for laughs this time. Although, I don’t know… when I pop up on B&B as a minister, I suppose that might be amusing to some people!”

When the soap first e-mailed Hilton to gauge his interest in appearing on the show, he replied with an enthusiastic yes. “Then, I heard nothing more from them, so I harassed them,” he recalls with a chuckle. “I said, ‘Hey! Is your offer still there? Because I really want to do it.’ So I guess it was a combination of their very kind interest and my persistence in making this happen.” 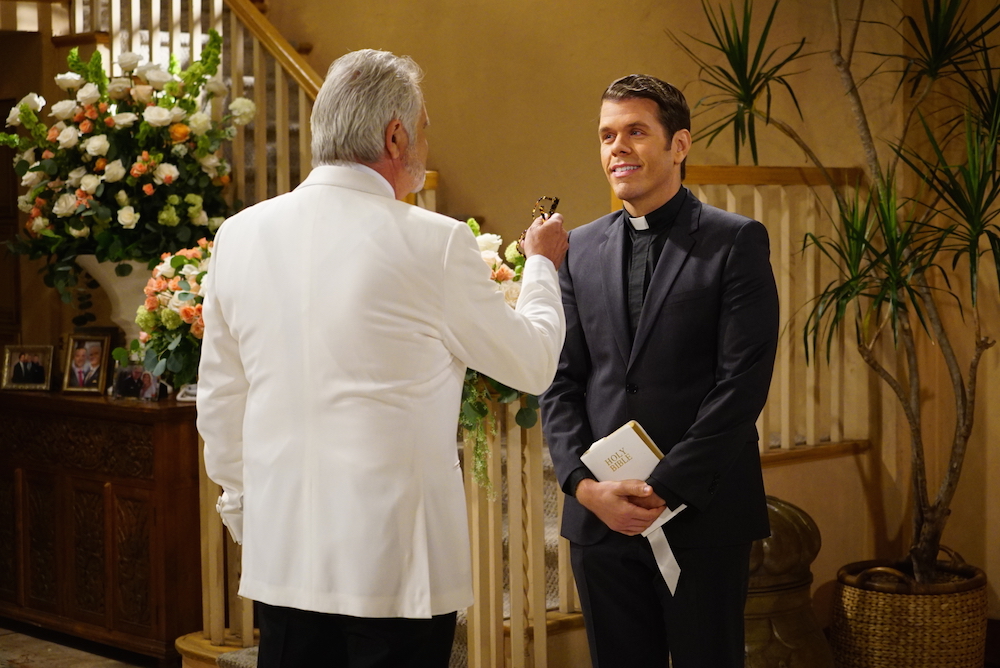 MUST SEE: The Twins Who Played Young Hope on B&B Are All Grown Up Now!

Hilton has appeared in a number of other film and TV projects this year, including a cameo on the Absolutely Fabulous movie, a low-budget horror flick called Most Likely To Die and two episodes of Comedy Central’s ANOTHER PERIOD. “I still love my day job, but I feel grateful that I get to [act] as well, because I enjoy it,” he says. “It’s what I went to school for back in the day, and it’s what I always envisioned myself doing.”

With his laptop open to update his site, perezhilton.com, the blogger noted that being on the B&B set wasn’t giving him any ideas for juicy soap gossip! “I’m a professional, so, no, I won’t be revealing any secrets I might find out on set,” he says with a smile. “No, no… I would like to keep working!”

In fact, he says he’d be happy to reprise the role of Rev. Murphy any time B&B might need a man of cloth to drop by. “Absolutely!” he says. “I would love to [come back]!”

Watch a preview of today’s can’t-miss episode below, and for more B&B news, keep reading the CBS edition of Soaps In Depth magazine!