Ridge and Brooke had another disagreement over which of their respective daughters ought to be with Liam. After meeting with a wedding planner to organize the details of Hope’s upcoming nuptials, Brooke was dismayed to find Taylor on her doorstep hoping to have a word with her! The former rivals immediately began hurling accusations at one another regarding the way things played out with their daughters. Ridge, meanwhile, sought out Liam to inform him that he was being played for a fool by his father and was doing exactly as the megalomaniac had hoped by rejecting Steffy. The designer later vehemently defended Steffy, insisting to anyone and everyone that she was not carrying on with Bill.

When he wasn’t beseeching Wyatt to keep quiet about the night he framed Steffy, Bill was begging the lady herself to reconsider her feelings for him. Despite Steffy’s insistence that she would only ever want Liam, Bill reminded her of their history and spelled out the potential upside of their ending up together. She asked him if he’d concocted the lie about their still sleeping together and he vigorously denied it. When Liam unexpectedly showed up at Steffy’s dcotor’s appointment, she struggled to convince him that she was in love with him and not his father. She tried to soften her ex’s heart by telling him she hoped to name their daughter Kelly, after his late mother. 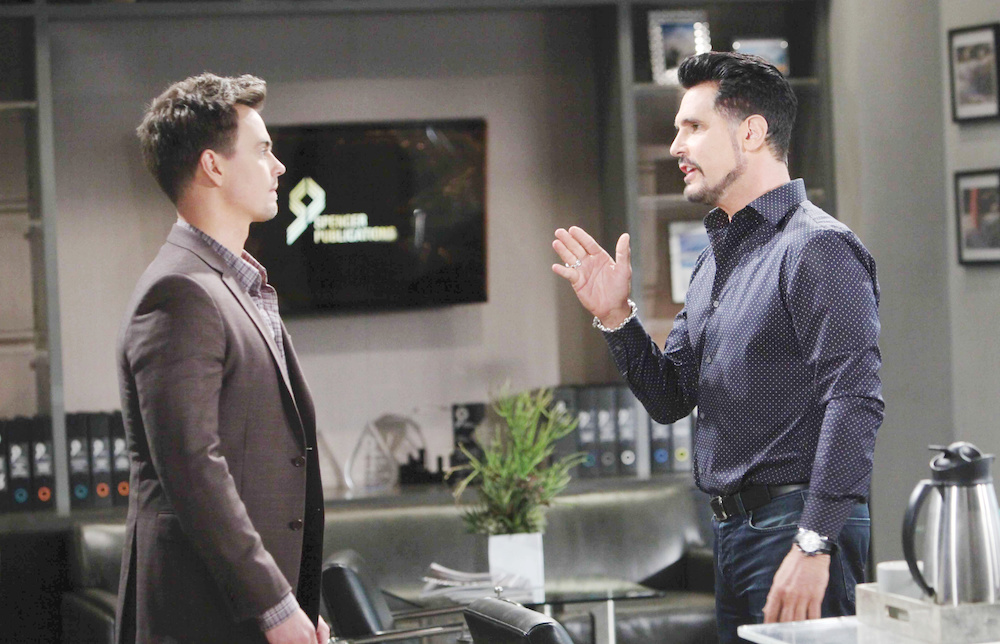 Who knew silence cost so much? (Photo Credit: Howard Wise/jpistudios.com)

Wyatt Found Out the Truth!

After agreeing to be best man at Liam’s wedding, Wyatt hit the roof when he overheard a conversation that wasn’t meant for his ears — one that revealed that Steffy’s “betrayal” was just one of Bill’s hoaxes! He unleashed his wrath on his father, who worried that Wyatt might blow his scheme by blabbing everything to Liam and Steffy. Bill attempted to butter up Wyatt with a few enticing gifts, including an offer relating to his future at Spencer Publications. When Wyatt shared his secret dilemma with Katie, her advice (namely, to keep quiet) shocked him! The younger man found himself resentful of Bill’s bribery attempts, and in the lead-up to his brother’s wedding wrestled with his conscience, especially after Liam asked him whether he was sure he didn’t misread what he’d seen the night Steffy was at Bill’s office.

A Wedding in the Works!

Liam and Hope shared a private and loving moment as they discussed the fact that they would soon be husband and wife. All seemed right in their world, and when Hope later tried on her mother’s altered wedding gown, she couldn’t help but feel giddy with anticipation. The Logan sisters gathered to help the blonde get ready on her big day, as friends and family members got together to share in the celebration. As the ceremony got underway, Justin attempted to convince Bill that best man Wyatt could potentially crack and tell Liam the truth!

Should Taylor Make Another Play for Ridge? — Vote Now!