Steffy felt like she’d taken a punch to the gut when Liam explained to her that he and Sally had shared a kiss while trapped under the rubble of the Spectra building. Hoping his wife would come to understand the extenuating circumstances, Liam found himself on the defensive, as she confronted him about the true depths of his feelings for the redhead. Steffy slipped away to the guest house on her granddad’s property, and Liam, hoping to move past his onetime moment of weakness, was desperate to track her down. Steffy ignored her husband’s repeated calls, feeling that the only person she could truly confide in about her pain was her father-in-law, Bill.

Sally admitted to Coco that she and Liam had kissed while they were trapped in the Spectra wreckage, and she further confessed that she was in love with the married man and had been for weeks! Later, Sally couldn’t help fantasizing about what it would be like if she were actually Mrs. Liam Spencer! Meanwhile, the man of her dreams received an unexpected visit from Wyatt, who pressed his brother on whether or not he was actually in love with Sally and if his marriage was beyond saving.

Bill’s attempt at comforting a distraught Steffy ended up taking a decidedly more carnal turn. Following their intimate encounter, Bill couldn’t take his mind off his daughter-in-law, but when she returned to the home she shared with Liam, her mind was primarily consumed with guilt… especially when he informed her about the surprise he’d ordered up! Wanting to make a fresh start in their marriage, Liam explained that he wanted them to renew their wedding vows, with Carter officiating! Unaware that at that very moment, Steffy and Liam were recommitting themselves to one another, Bill ordered Justin to get his private yacht ready for a romantic adventure… one he expected to share with Steffy! 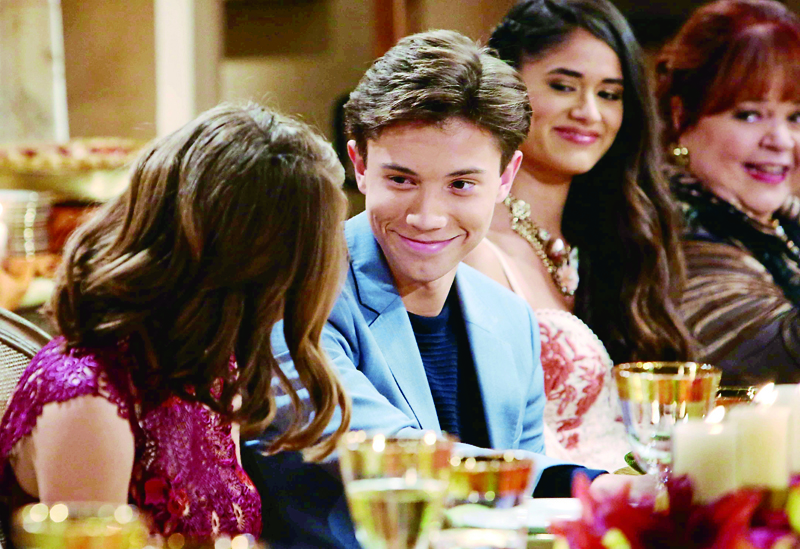 We’re pretty sure the thing RJ is most thankful for this year is Coco! (Photo Credit: Howard Wise/jpistudios.com)

Once it became clear to Bill that Steffy had reunited with Liam, he beat himself up over their one-night stand. Knowing this betrayal flew in the face of the “family loyalty” credo he lived by, Bill felt down-right tormented. Steffy eventually saw a not-so-pleasant side of Bill when he questioned her decision to return to his son. Justin suspected that Bill’s apparent angst stemmed from losing Brooke, unaware that he was actually trying to contain his attraction to his daughter-in-law! Bill’s guilt reached its zenith when Liam approached him, asking to be given another opportunity to prove his loyalty and devotion to his dad.

Members of the Forrester, Logan and Avant families gathered together in preparation for their annual Thanksgiving dinner at the Forrester mansion. Thought there was an underlying fear among some — including Eric and Quinn — that Sheila might turn up to wreak more havoc, others were concerned about the more imminent drama inherent in having to be seated next to people they wished they could avoid. Nevertheless, in keeping with tradition, everyone managed to nd something to be grateful for and to say something kind about the person seated immediately to their right.