A lot can happen in a day on THE BOLD & THE BEAUTIFUL, so it’s easy to get lost. If you’ve missed anything that happened over the last week or so on the soap, our recaps will help you get back up to speed in no time!

With Hope acting as a mediator, of sorts, Liam privately confessed to Bill that he was the person who’d shot him. Initially, Bill was disbelieving, thinking it was merely a ploy to get Ridge off the hook. Liam eventually managed to persuade his father to take a long, hard look at his own culpability in the current predicament. The Forresters were overjoyed when Ridge was finally released from jail after Bill changed his story about having seen Ridge shoot him. Of course, with Ridge no longer a suspect, everyone wondered who’d really pulled the trigger! Eric and Wyatt each pondered whether someone else in the family fold was the would-be murderer. Thorne had mixed feelings about Ridge’s return, believing that his brother’s absence had only served to prove that Forrester Creations could function just fine without him in the CEO’s chair. Later, Detective Sanchez suggested recreating the night of the crime to jog Bill’s memory about who might have pulled the trigger.

Hope tried to help Liam overcome his feelings of guilt with regard to the shooting, urging him not to let incidents of recent months cast doubt on his own integrity. After all, she posited, Bill and Steffy were mostly to blame! Just as Liam had confided in Hope about trying to off his father, she had a secret confession of her own for him: She was still deeply in love with him! Though Steffy took her father’s release from jail as a sign that Liam still loved her enough to convince his dad to back off his accusations, she couldn’t help but worry about the amount of time Liam and Hope had been spending together. Her suspicions had merit. Not only were Liam and Hope exploring their feelings for each other, but they also shared a kiss! 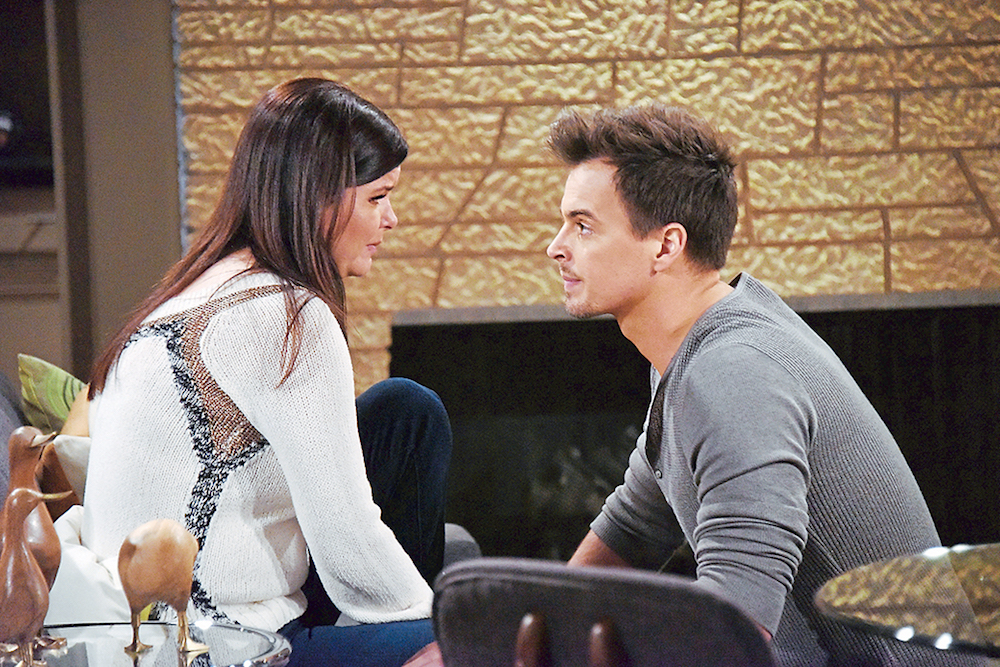 ”What if Bill tries to take Will from me, Wyatt? Wait… where is Will? I haven’t seen him in days…” (Photo Credit: Howard Wise/jpistudios.com)

While his father continued to recuperate from the shooting at home, Wyatt filled in as the big boss at Spencer Publications, where he found himself facing a special request from former employee Jarrett. Thorne managed to get under Katie’s skin when he pressed her on the pros and cons of building a life with Wyatt. She was unnerved when Thorne pointed out that Wyatt and Bill would always be a package deal. Upon discovering that Katie still feared Bill would go through with suing for full custody of Will, Wyatt decided to take immediate action. Bill later offered Wyatt the keys to his proverbial kingdom (i.e., an assurance he would one day run Spencer Publications), but it came with one pretty major stipulation.

After arguing with her stepsister about Liam’s current state of mind, Steffy made a bold accusation against Hope. Though Hope and Liam continued to work closely together on Hope For The Future, Steffy tried to capitalize on a surprise run-in with Liam at Forrester Creations. Ridge naturally took his daughter’s side in the Steffy/Hope rivalry, and he was blunt in his assessment of Hope’s motives in a conversation with Brooke. Meanwhile, Brooke could see that her husband’s real anger issues still centered around Bill and the mess he’d made of Steffy’s marriage. After Ridge paid Bill an unwelcome house call, Brooke warned her hubby that he could end up right back behind bars if he didn’t get a handle on his rage!

How to Watch the 2018 Daytime Emmy Awards

Vote for Who You Think Should Win Daytime Emmys This Year