While packing up his office at Spencer Publications, Liam had a run-in with his father, who urged him not to turn his back on Steffy and their unborn child. Sally later found Liam about to exit the building and realized quickly that he was in a real state. Worried, she followed him to the hotel where he’d been staying and pressed him for information, refusing to let him dodge her questions. Liam finally told Sally that he no longer worked for Spencer Publications and would, therefore, be unable to continue helping her relocate Spectra to a new building. When he later returned to the beach house, Steffy hoped he was there to work things out. She desperately tried convincing her husband that they could (and should) overcome her infidelity for the sake of their baby. After this meeting, Steffy found her way to Bill, who was in shock when she relayed Liam’s final words to her!

Ridge surprised Brooke by bringing her daughter, Hope, back to Los Angeles, and the blonde told her overjoyed mother she intended to stick around. Brooke’s feelings of joy soon turned to dismay, however, when Hope and Rick launched into a sibling squabble. After catching up with Pam, Hope met Sally in an encounter that was rife with tension. Hope noticed that Sally seemed to have feelings for Liam, and the redhead admitted she and the hunk had kissed, While discussing the man in question’s current marital woes, Hope wondered what was behind Liam’s split with Steffy. Sally made it clear to the blonde that if Liam should become a free agent again, she had dibs on his heart! Hope eventually reached out to Liam, offering him her friendship and support during this difficult time in his life. 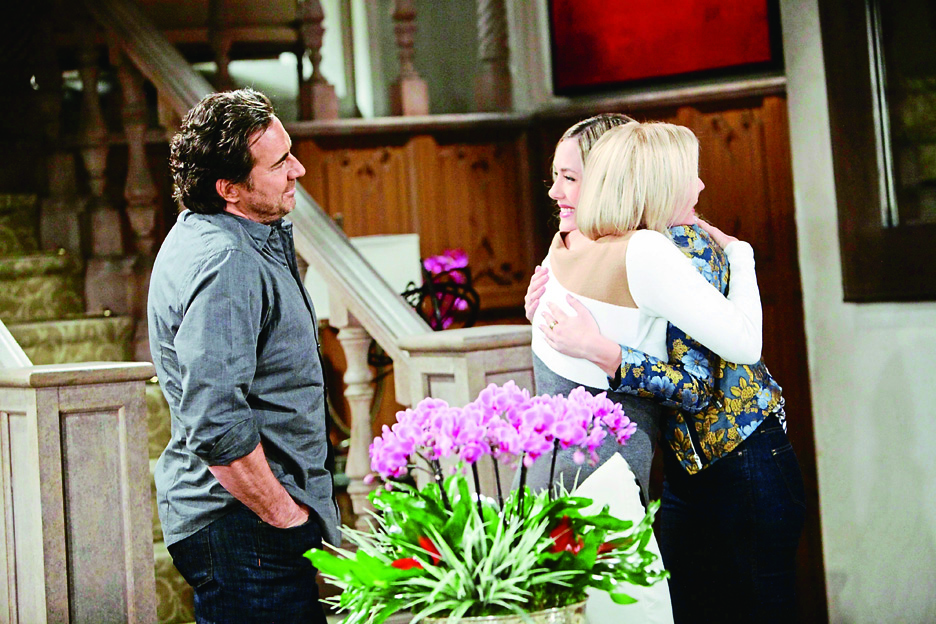 Hope pretended to be surprised that her mom was getting married (again) to Ridge (again). (Photo Credit: Howard Wise/jpistudios.com)

After Liam quit his job, Wyatt was gobsmacked to discover the reason why. He confronted his father and went off on him, disgusted that he could have bedded his own son’s wife! Soon after Wyatt left, Katie arrived to give Bill a piece of her mind regarding his abominable behavior. Bill was a wreck, and later revealed to Justin the true extent of his feelings for Steffy. When Carter approached him with Brooke’s divorce papers, Bill didn’t even bother putting up a fight. Bill later found himself on the hot seat when Ridge barged into his office. He wondered if the “dressmaker” had found out about his affair with Steffy and was there to unleash. Steffy feared what her dad’s reaction might be if he found out about her indiscretion with Bill.

Maya urged Rick to confront Ridge about any lingering feelings he might have for Quinn. Ridge, meanwhile, was happy to be moving full-steam ahead toward tying the knot with Brooke. After enjoying a romantic breakfast in bed, Ridge informed Brooke that Carter was at that very moment serving Bill his divorce papers, meaning they’d be free to get married soon. Thorne and Rick continued to plead their case with Eric, each convinced that Ridge was not a suitable husband for Brooke. Moreover, the guys urged Eric to oust their big brother from the company and let them step up to lead in his place. Ridge and Brooke held a family meeting to announce their plans to become husband and wife again. Ridge made it clear that Thorne would be invited only if he could get on board with their romantic reunion and be supportive. Hoping Bill might throw up a roadblock, Thorne was disappointed to hear that Brooke’s latest husband had signed the divorce papers. Nicole offered Thorne some save advice regarding how he might best move forward where his feelings for Brooke were concerned.

The Entire Dramatic History of Hope on B&B