Having been agonized by the wait, Steffy finally found out the identity of the father of her baby. A wave of relief washed over her when she learned Liam was the daddy, but she was still wracked with guilt about the night she and Bill shared. Though she remained uncertain about the future of her marriage in light of the secret she was keeping, she daydreamed about a happy life with Liam and their child. Meanwhile, Bill dodged Justin’s questions about his feelings for Steffy, but finally admitted to his pal that the beauty was pregnant. Not indicating whether or not he could be the father, Bill instead confessed to Justin that he never expected to fall in love with his son’s wife!

The Truth Came Out!

Liam was perplexed — and greatly alarmed — when he inadvertently discovered that Steffy had gone to Dr. Campbell for a paternity test. He wondered why she could possibly need one, and the sinking feeling in the pit of his stomach gave him the dreaded answer. When he confronted his wife about the test, Steffy became emotionally distraught until she finally came clean with him about having slept with his father. Liam angrily demanded all the details relating to this affair, and Steffy broke down in an unimaginable way following their argument. Liam attacked his wife with harsh, angry words before finally walking out, leaving her alone and heartbroken. 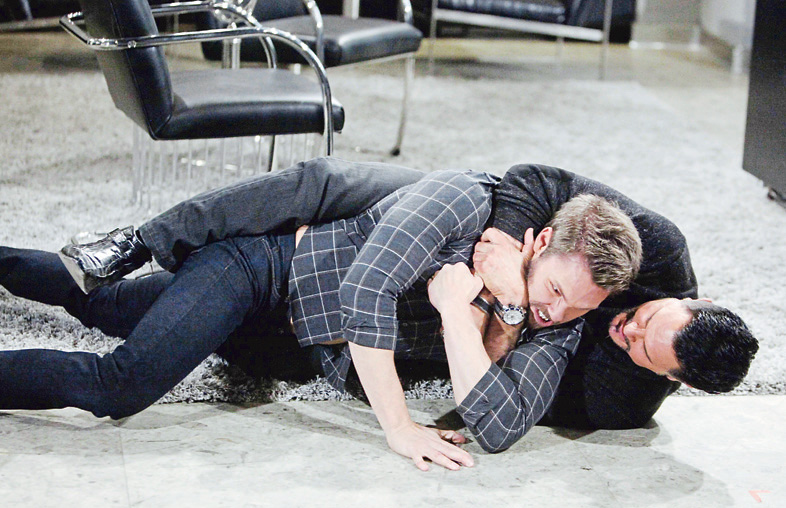 Bill Faced the Wrath of His Betrayed Son!

Upon learning that Bill was going to give Liam and Steffy the cliff house in which they were currently residing, Wyatt wondered what prompted such a generous gesture. He prodded his dad for answers, but came up empty-handed. Later, Bill received a visit from Liam, and from the look on his son’s face, he knew exactly why he was there. Bill blocked the exit to his office so they would be forced to confront the reality of the situation head-on and talk it out, but Liam was in no mood for rational discussions. Instead, he unleashed a fury upon his father unlike anything he’d ever felt before!

Katie’s first encounter with Thorne since his return was an awkward one, considering when she opened the door to him she was wearing sexy lingerie (assuming he was Wyatt)! Once she was more appropriately attired, the two caught up on old times. Learning from Thorne that Brooke had “evicted” him because of his poor attitude toward her fiancé, Ridge, Katie told him he was free to hang his hat at her place until he got settled in Los Angeles. Later, when Katie arrived at Steffy’s house to congratulate her on the pregnancy, she was stunned to find the mother-to-be wallowing in grief. Steffy broke down in Katie’s arms and confessed to her about her adulterous affair with Bill.

As Rick and Nicole discussed the blissful state of his family life with his wife and baby Lizzy, Maya herself was having an interesting discussion with her former flame, Carter. The attorney sincerely apologized to her for the reaction he’d had to her disclosing that she was transgender, and he shocked her with a bombshell admission: He still had feelings for her!

The Entire Dramatic History of Hope on B&B

B&B Fans Are Worried Liam Is Leaving the Soap