Though she bonded with Liam over their love for their daughter, Steffy found it hard not to be distracted by the news of Hope’s pregnancy — and what it could mean for her own future with him. Given this new major conundrum in their lives, Liam told Steffy they ought to hold off on any possible wedding plans, which came as a blow to the brunette. Hope and Steffy later argued about Liam’s new duty to not one but two families. Liam told Hope that he needed to take the time to sort out his feelings so that neither she nor Steffy ended up getting hurt more than they already had been by him. Brooke later tried to convince Liam of all the reasons that Hope would be a more ideal match for him.

After Liam filled in Wyatt about Hope’s pregnancy, his brother ended up spilling the baby beans to Bill, who was, needless to say, ver y intrigued by the news. Realizing this development could change his game plan (or, rather, get him back in the game with regards to Steffy), Bill hatched a new plot to take advantage of the situation. He made another outlandish request of Justin — one the attorney felt conflicted about. Bill met with Steffy to deliver a not-so-tactful “I told you so” about Liam’s ongoing love for Hope, but Steffy surprised him by defending her would-be husband. Bill set Steffy up for another fall in order to (he hoped) gain her love. 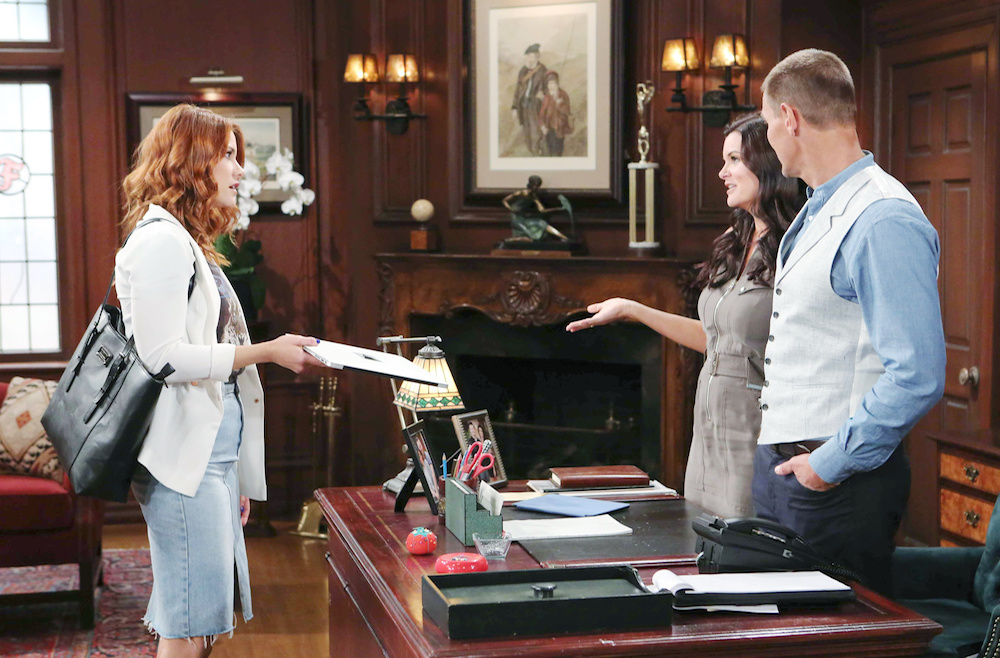 Who Is Threatening Hope?

Katie and Thorne blew off a Hope For The Future meeting for an outing to the Bikini Bar, where they decided to hire computer specialist Ken to get to the bottom of who was leaving online threats against Hope. They came to the conclusion that Sally must be behind the threats, but when they confronted her, the redhead vigorously denied it. Having already confided in Wyatt her suspicions about the woman he hired to paint the mural at his home, Sally (after an enlightening conversation with Xander) suspected mysterious newcomer Zoe must be somehow involved. She phoned Wyatt, telling him Zoe was trouble.

While Sally and Xander were beginning to sound the alarm bells over Zoe, Emma was finding out firsthand what a nightmare the newbie could be! In a confrontation, Zoe became forceful with Emma when she tried to leave, but Zoe was called to account when Xander, Sally and Thorne showed up to expose her. Thorne warned Zoe that Emma had the power to put her in jail for what she’d done. Xander reminded Zoe that she was not his girlfriend, as much as she might like to think otherwise. He later demanded that she leave L.A. immediately and return to London, but Zoe had other plans — namely, to make a splash at the Hope For The Future fashion show!

Despite the drama happening behind the scenes, Hope was incredibly excited to unveil her reinvented line at the fashion show. She and Brooke shared a poignant mother/daughter moment as Hope saw to all the last-minute details, while Emma prepared for her big moment as a dancer on the runway. Liam showed up at the event in support of Hope, while Justin attended to root for his niece, but they weren’t the only unexpected guests. Zoe turned up, too, wearing a disguise! As Emma took to the stage to show off her dance moves, Zoe found an opportunity to outshine her rival.

Nicola Posener Joins the Cast of B&B as Amelia

Everything You Need to Know About Zoe