With Steffy playing mediator, Bill and Liam sat down for a pow-wow about their feud and finally began to make some headway toward reconciliation. Liam, unaware of the lengths Bill and Justin had gone to take care of the evidence Liam had against his father, was moved by his dad’s display of regret and remorse. As Steffy beamed with pride, father and son agreed to set aside their differences and promised never to fight this way again. Though Liam was grateful to his wife for helping him smooth things over with Bill, he and Steffy continued to bicker over his charitable attitude toward Sally. Steffy later filled Ridge in on the peace accord she’d helped broker without revealing what had caused the rift between her husband and father-in-law in the first place.

Quinn went off on her husband when she found out that Eric had known (but never told her) about Wyatt and Katie’s relationship. Needing a breather following their argument, Eric stormed out in a huff. Quinn turned to a massage therapy session with Mateo to help her de-stress, which quickly turned into a counseling session as she unburdened her fears and anxiety to the young man. Feeling pressured by Sheila, Mateo upped his seduction game, but seeing Quinn’s response to his inappropriate behavior led him to instantly regret his money-driven gambit. Quinn was greatly unnerved by the encounter. Meanwhile, Charlie feared that Sheila was busy causing more trouble for the Forrester clan, and Pam pressed her beau to divulge what she knew. 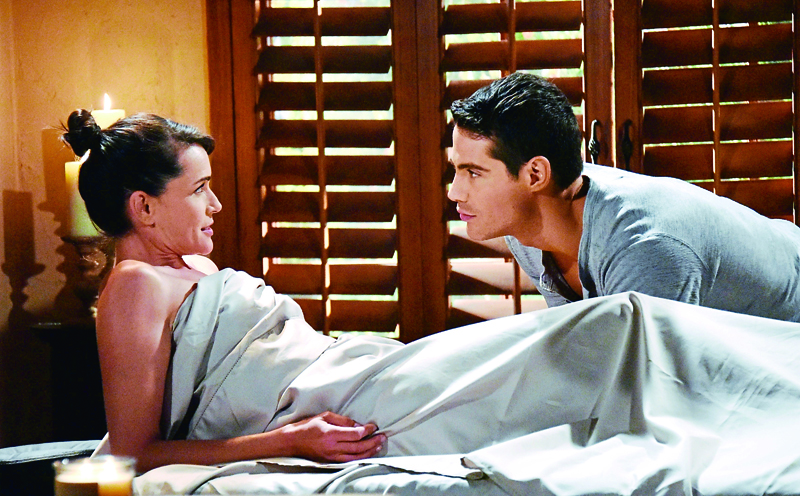 Although getting handsy was part of his job, Mateo took things a bit too far. (Photo Credit: Jill Johnson/jpistudios.com)

Fresh off his argument with Quinn, Eric wound up at Il Giardino, where Sheila wasted no time in trying to turn him against Quinn. She later told her ex that Quinn was having an affair with Mateo. Outraged by Sheila’s claim, Eric invited Sheila — along with her portrait — to his house so that she could replace Quinn, both in his life and on the wall. But despite her scheming and bribery, the situation did not unfold the way Sheila anticipated it would! The devious plotter — realizing the tables had been turned on her — pleaded with Eric to believe that she loved him and only wanted what was best for him.

Katie and Wyatt feared what Quinn would do about their relationship, but the lovers soon realized that his mom was so preoccupied with Sheila’s schemes to sabotage her marriage that she didn’t have much extra time to stew about her son’s love life. In fact, after filling Wyatt in on her disconcerting encounter with Mateo, Quinn even promised that she would keep her negative feelings for Katie in check. Wyatt was dubious, but even more so about the olive branch his dad had offered to Liam. Wyatt was stunned when Bill informed him that he and Liam would join him as co-CEOs, a Spencer triumvirate of sorts. After saying all of the things he needed to say to mollify Liam, Bill later turned to Wyatt as an Ally regarding future decisions he planned to make regarding the company’s future.

Without breaking her promise to Liam regarding keeping quiet about his gift — and Bill’s crime — Sally indirectly confirmed Shirley’s suspicions about how they came to have ownership of the Spectra property.

Will Brooke Go Running Back to Bill or Ridge?