Though Liam confronted Steffy about the lie she told regarding her whereabouts the night she walked out on him, she managed to cover her tracks. The couple eventually seemed to have surmounted the hurdle in their relationship, despite Steffy’s lingering feelings of guilt about her night spent shagging Bill. Liam was on cloud nine when he received the life-altering news that his wife was pregnant. A more reserved Steffy didn’t seem to share in her husband’s elation, and with good reason: She wasn’t sure whether he — or his father, Bill — was the daddy! Liam misread Steffy’s lack of excitement about her condition, and she later had a horrifying fantasy about the outcome of her pregnancy. Steffy arranged to meet Bill privately to discuss her shocking news, and he was stunned upon realizing he might be the father! An angst-ridden Bill urged his daughter-in-law to have a paternity test. Later, while she was at this nail-biting appointment, Liam voiced his love and appreciation for Bill given everything they’d been through of late.

Brooke broke up yet another argument between Thorne and Ridge. After she demanded that Ridge leave, Thorne took his opportunity alone with the blonde to move in for a kiss! He admitted that he’d been wanting to do that for a while and asked her if she might like to give their relationship another try after all these years. Little did he know that Quinn had already designed an engagement ring for Ridge to present to Brooke! Soon after, Ridge arrived at Brooke’s house to romance her and ask her to finally tie the knot with him again. Meanwhile, Thorne discussed Ridge’s hostility towards him with Eric and suggested ousting him from the company so that he and Eric could finally work together as a true father/son team. Before Thorne could finish convincing his father to fire his brother, Quinn interrupted and let them know that Ridge was proposing to Brooke at that very moment. 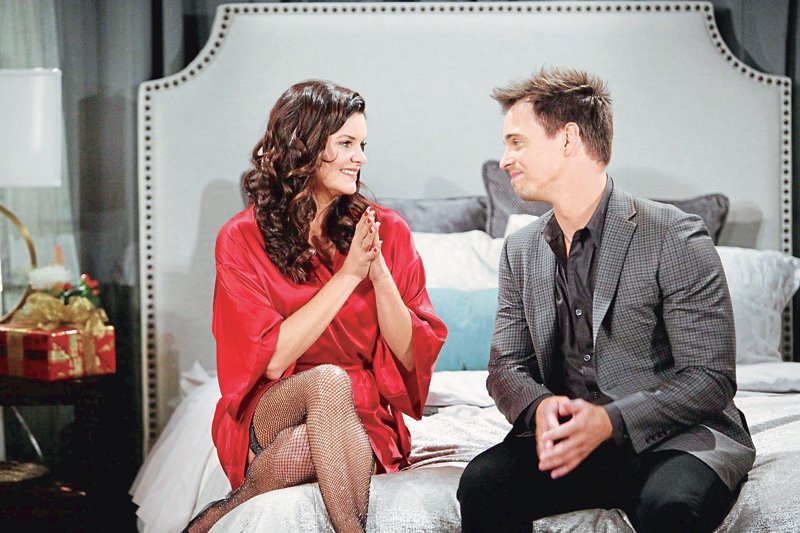 After spying Thorne and Brooke sharing a close moment, Nicole told her sister that she thought they might actually have feelings for one another. This hunch was confirmed when Thorne later approached Rick and asked for his help in thwarting a Ridge/Brooke reunion. Overjoyed that he wasn’t the only one who disapproved of Ridge, Rick quickly jumped on board with the idea. He and Maya were flabbergasted when Thorne later revealed the true reason Ridge and Brooke didn’t get hitched in Sydney. Thorne didn’t deny Rick’s theory that he was actually in love with Brooke, and he later pressed his case in person by trying to convince the blonde that his brother was and always would be bad news. Brooke reminded Thorne that he needed to respect her relationship with Ridge if he intended to continue living under her roof.

Katie Got a Warning!

Katie finally confided in Brooke about the new man in her life, but her sister issued her a stern warning about how Bill might react to finding out that his ex-wife was currently sleeping with his son. Katie told Wyatt that she’d spilled the beans to Brooke about their relationship, and he worried that the more people who knew, the more likely it would be that Bill would learn the truth — and go berserk! Katie managed to ease her beau’s mind by presenting him with the gift she bought him for Christmas… a gift that required him to unwrap her! Underneath her robe, he found she was wearing “Sexy Santa” lingerie.

Christmas got underway at the Forrester mansion with the Logan, Forrester and Avant families gathered together to share the spirit of the season. Eric and Brooke made poignant toasts about the true meaning of the holiday, while Ridge and Brooke later seized the joyful occasion to announce their engagement. In keeping with family tradition, the whole family gathered around the piano to sing a Christmas carol as Eric played accompaniment.