Previously on THE BOLD & THE BEAUTIFUL:

Wyatt and Liam continued to bicker at the office about the latter’s unexpected rise to power at Spencer Publications. Liam ultimately told his brother to deal with it or leave the company. Later, Wyatt and Justin discovered a piece of information regarding Liam’s business dealings with Spectra Fashions. While gossiping with Katie over the latest drama in their respective families, Wyatt began to connect the dots about his dad’s involvement with the Spectra fire. After Katie confirmed his theory, Wyatt went straight to Bill to confront him. Bill confessed that he was being blackmailed by Liam. Outraged by his brother’s lack of loyalty, Wyatt turned his anger on Liam, who revealed further damning information about their dad’s recent misdeeds. Though Wyatt warned his brother against messing with Bill, Liam, in turn, made him a tempting offer that would no doubt wind up further upsetting their dad.

Brooke walked out on her marriage after discovering Bill’s role in the Spectra fire. She turned to Ridge for solace without explaining the actual reason behind the separation. Ridge couldn’t resist taunting his romantic rival about the fact that he’d blown it with the blonde. Bill warned Ridge to stay out of his marital problems… or else! R.J. encouraged his mother to see what he, himself, already knew: that there was really no other man for her but Ridge. Though Bill made a heartfelt plea for Brooke to forgive his misdeeds, she was unable to see a future for them. After she offered her family a tactful (but not incriminating) explanation of her split from Bill, they helped move her belongings back into the Logan mansion. Brooke begged Ridge to respect her privacy when he further grilled her about the end of her marriage. Instead, Ridge smugly implied that he planned to spend much more time with her in the days and months to come. Ridge’s week got even better when Eric voiced how much he regretted the harsh words he’d spoken to him during their argument over Quinn 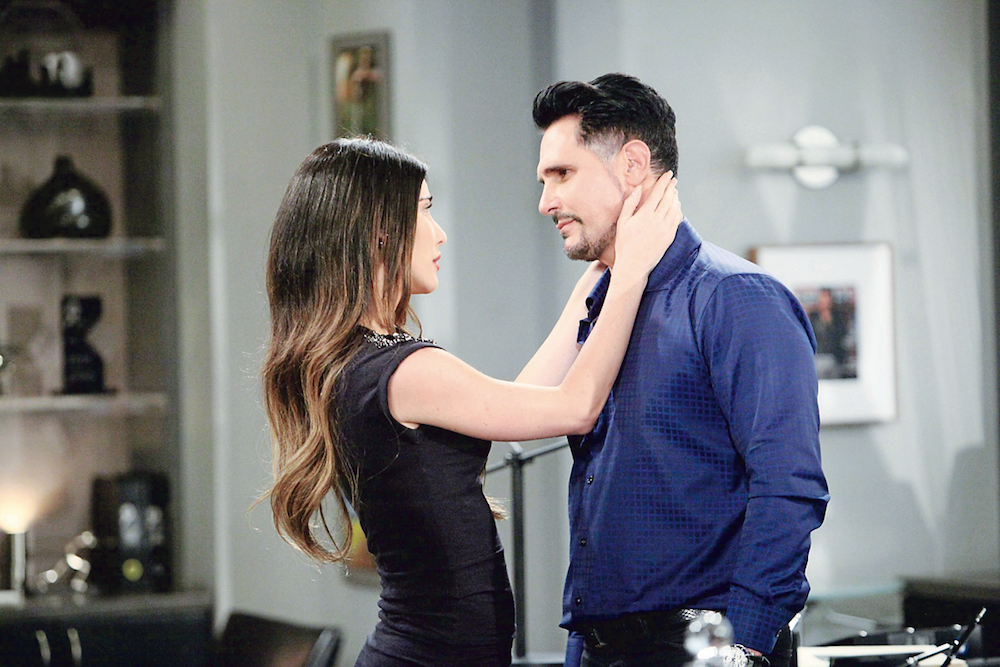 Steffy’s attempt to keep Bill from hearing people badmouthing him failed when she missed his ears. By a mile. (Photo Credit: Howard Wise/jpistudios.com)

Steffy’s many attempts to get her husband to listen to reason regarding his impasse with Bill were met with Liam’s unyielding insistence that he had no desire to compromise. Steffy consoled Bill over the end of his marriage and promised him that she eventually would persuade Liam to have a change of heart about shutting his dad out of the company he’d forged. She arranged for Bill and Liam to meet, but when the peace talks fell apart, she reminded her husband about the damage his anger was doing to the family. Later, Steffy and Bill shared a deep understanding of each other as she continued to offer him compassion and assistance in solving his troubles.

Thanks to Liam’s generosity, the Spectra group was thrilled to see renovations being made on their damaged offices, though only Sally was aware of the identity of their benefactor. Steffy had some choice words for her husband about his amiable association with Sally, but he told her his professional dealings with the redhead were frankly none of her concern! Stymied by this response, Steffy paid Sally a visit to put her on notice regarding her frequent get-togethers with Liam. Sally later gave Liam a tour of the new-and-improved Spectra Fashions, and he surprised her with something that would greatly assist her endeavors to rebuild the company.