Katie is on the verge of doing something she may regret in these spoilers from THE BOLD & THE BEAUTIFUL!

After Katie threatened her with a gun, Quinn has been on edge and shares her fears with Ridge that their secret is going to be exposed. “We can’t keep putting ourselves in these dangerous situations,” she admits.

Meanwhile, having spied Quinn and Ridge together through her telescope, Katie vents her frustration to Ivy. “Do you think I want to tell Eric?” she asks angrily. “Do you think I want to hurt him like that? No, I don’t. But Quinn is dangerous. She’s always been dangerous. And I can’t just stand by and do nothing!” Since she seems unable to keep Ridge and Quinn apart, is Katie’s last resort finally going to Eric with the truth about his wife? “She needs to be stopped!” Katie declares, fury glinting in her eyes. “Once and for all.” Can Ivy talk Katie down off the ledge before she does something she can’t take back?

MUST SEE: B&B’s Former Thorne Was Unrecognizable During His AMERICA’S GOT TALENT Audition! 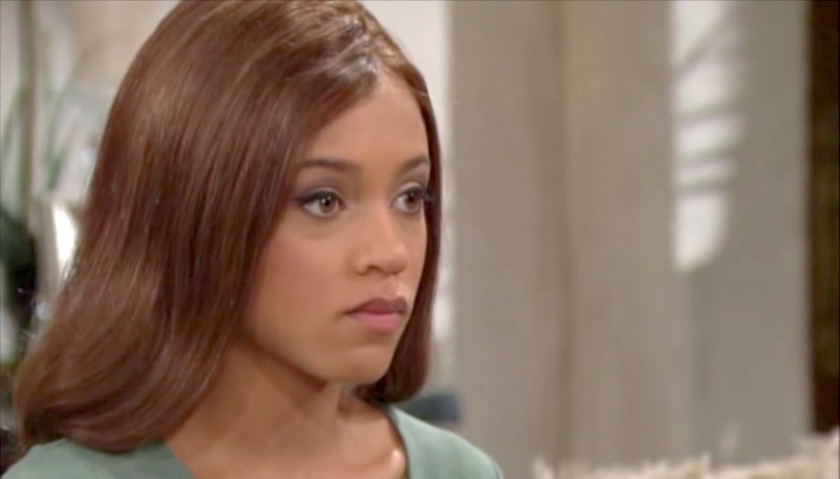 Nicole has an important decision to make! (Photo Credit: CBS)

MUST SEE: The Truth About Nicole’s Amenorrhea Diagnosis

Nicole is also skirting the edge of reason as she becomes more and more obsessed with Lizzie. The idea that she won’t be able to have more children of her own has made the young woman begin to regret carrying the little girl as Rick and Maya’s surrogate only to have to give her up. And Julius is subtly manipulating her. “She’s your daughter,” he reminds his child. “You are her mother. Nicole, and don’t you ever forget that!” What will the family situation be when Rick and Maya return from Paris? They probably shouldn’t stay away too much longer!

Check out this tease from today’s emotional episode, and for more B&B previews, keep reading the CBS edition of Soaps In Depth magazine!