More people are learning about the lie that Bill told in these spoilers from THE BOLD & THE BEAUTIFUL. And when the truth comes out, his house of cards is going to come crashing down around him!

Having lured Thomas away from Spectra to be in New York with Caroline and their son, Bill is confident his lie that Caroline is dying will doom Sally’s upstart fashion house. “If he’s out of the picture,” Bill declares, “they’re out of business.” And over at Spectra, while everyone else at the company is worried about what will happen without Thomas there to help steer them in the right direction, Sally tries to reassure them… and herself. “I know right now,” she insists, “that spending time with Douglas and Caroline is exactly where Thomas needs to be.” But then Liam arrives at Spencer to confirm the shocking news that he just heard about his cousin. “Sally said that Caroline is dying,” he says, clearly upset that he was kept in the dark about this. Will Bill let Liam know it’s all a big lie? And if he does, will Liam agree to keep up the horrible charade?

MUST SEE: Felisha Cooper Has a Hilarious New Role! 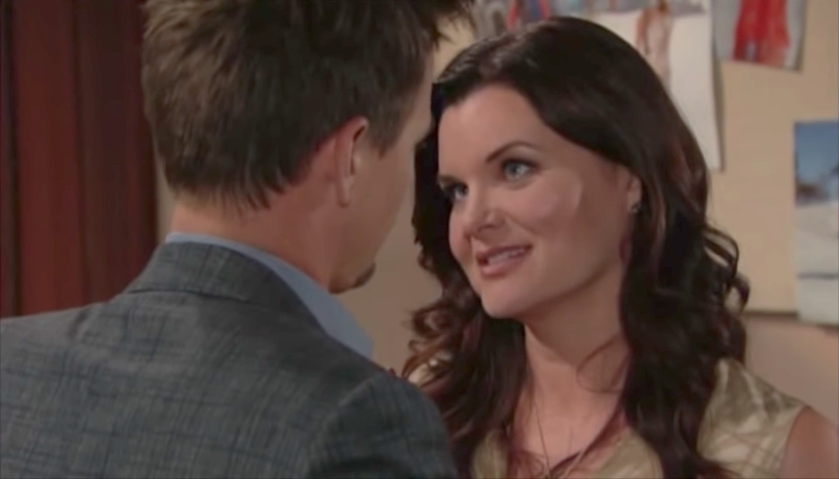 Katie is still keeping Wyatt to herself. (Photo Credit: CBS)

MUST SEE: Everything You Need to Know About Maya on B&B

Katie was reluctant to give things a chance with Wyatt, but now she seems willing to finally let herself have some fun… even if she’s keeping their budding relationship quiet for the time being. Even her sister, Brooke, doesn’t know exactly why her mood has improved of late! “I think she’s happy that I’m happy,” Katie tells Wyatt with a sly smile. “But she doesn’t know the reason.” But will everyone still be happy for Katie’s newfound happiness when they learn about her and Wyatt?

Ian Buchanan Opens up About His Return to B&B