Liam tries to make his fantasy of taking down his father a reality in these spoilers from THE BOLD & THE BEAUTIFUL. But Bill isn’t going to make it easy for him! And what is Maya so worried about?

Sadly, Bill being arrested for setting fire to Spectra Fashions was all in Liam’s mind. And while he may not want to put his father behind bars, Liam is eager to exercise this new power that he thinks he has over Bill and heads over to Spencer to do just that. “I’m not gonna let you scam Sally and her family out of their property because you need to tower over L.A.,” he warns his dad. “You’re not gonna put your damn building on their property.”

But Bill isn’t one to back down, especially not to his own son! “You will not say or do anything,” he scolds, “to compromise my acquisition of that property or the construction of Spencer Tower.” But with Liam holding the truth over Bill’s head, will he really let his father talk to him like that? 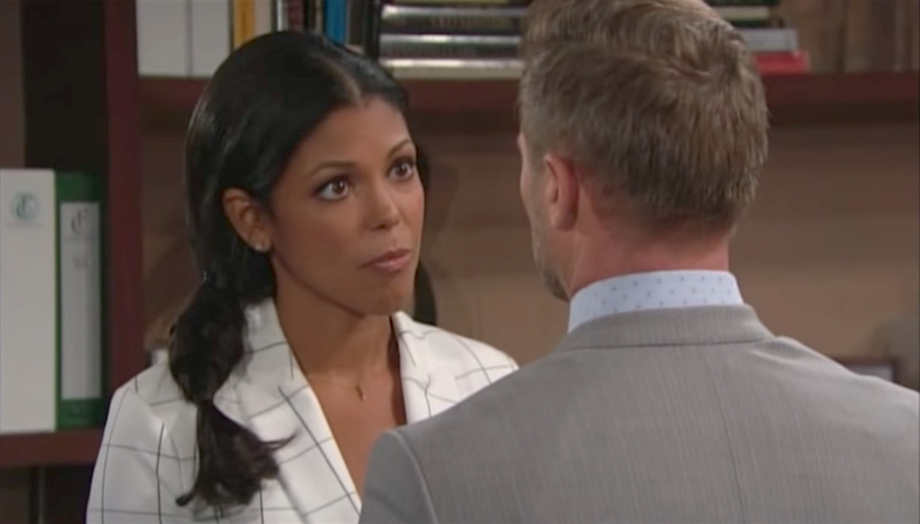 Can Rick calm his wife down? (Photo Credit: CBS)

It’s been a while since Maya and Rick have had anything resembling a storyline of their own, but that’s not what she’s worried about. “I just can’t help feeling concerned,” she confessed to her husband. Things have been going well for them, so what in the world does Maya have to be nervous about? Is there trouble at Forrester? Or something to do with her family? Trouble in Nicole and Zende’s marriage, perhaps?

Don’t miss this preview for today’s tense episode, and for more B&B previews, keep reading the CBS edition of Soaps In Depth magazine!

TODAY: Bill and Liam argue about the construction of Spencer Tower over the former Spectra property. #BoldandBeautiful pic.twitter.com/o7guz8yVv0