Ridge is desperate to keep his life from self-destructing in these spoilers from THE BOLD & THE BEAUTIFUL!

With the scandalous secret of their multiple liplocks hanging over them, Quinn remarks, “You could ruin my life if you wanted to.” Ridge sighs and admits, “Not without ruining my own life.” But even with mutually assured destruction helping to give them both a very good reason to keep quiet, Quinn still worries that their passion cannot be contained. However, Ridge dismisses her fears. “You don’t feel anything?” Quinn asks him in disbelief, to which he just shakes his head. But is Ridge not only lying to Quinn but himself?

MUST SEE: B&B Leads Up to Its 30th Anniversary With Special Flashbacks! 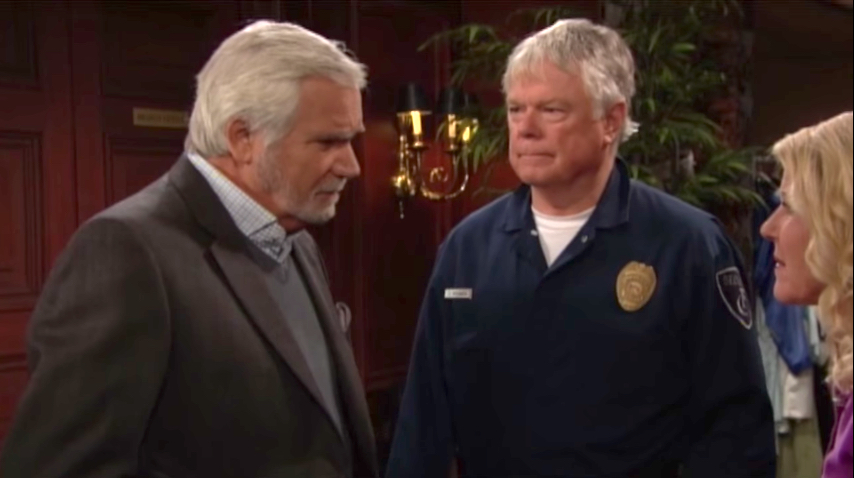 Eric remains oblivious to what his wife is really up to! (Photo Credit: CBS)

MUST SEE: Win Singin’ in the Rain on Blu-ray and an HDTV and Blu-ray player!

After Charlie reveals his suspicions that Quinn and Ridge are having an affair, Pam finds it incredibly hard to believe that would even be possible. “They have worked so hard to rebuild their trust,” she insists. “Ridge wouldn’t just throw that away!” When Eric joins their conversation, he declares, “Every time Quinn and Ridge are forced to spend time together, they end up getting along better.” Oh, he has no idea — But he will if Charlie opens his big mouth and spills their secret!