Ridge continues trying to win back Brooke’s heart in these spoilers from THE BOLD & THE BEAUTIFUL, but will it be enough?

While she was engaged to marry Ridge, Bill kept insisting to Brooke that she would one day return to his side. And now that she has, and is wearing Bill’s ring on her finger, Brooke finds herself in exactly the same position with Ridge, who also refuses to give up on their love. “We’re gonna end up together,” he insists with a smile as he sits across from her at Il Giardino. “You and me. That’s how it ends. You know that as well as I do.” But does Brooke feel the same way? 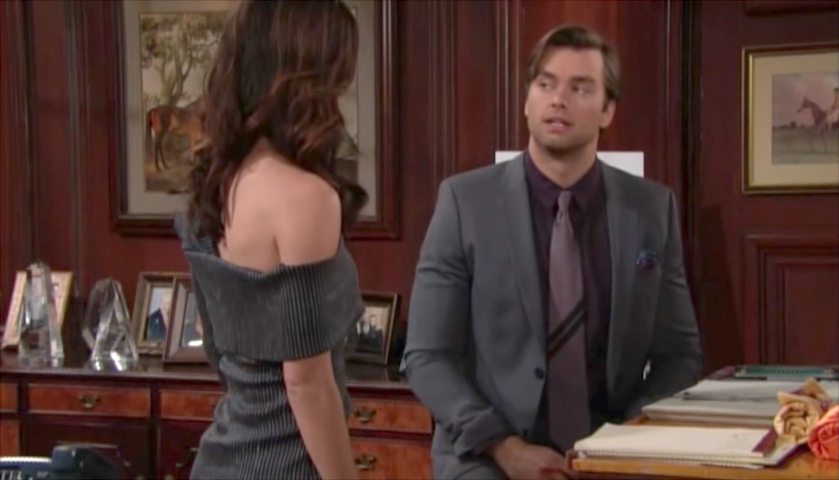 MUST SEE: The Most Stunning Red Carpet Looks at the 2017 Daytime Emmys!

Bill remains determined to oust Spectra and buy the building so he can build his skyscraper. “What kind of man thinks it’s okay to steal someone else’s hard work?” he muses angrily. And over at Forrester, Thomas is wrestling with his conscience as the family plans to prosecute Sally and put her in prison for stealing their designs. “She lied and she stole from us,” he admits to Steffy. “And if it were anybody else I would have no problem picturing them rotting in prison right now.” Obviously, Thomas pictures Sally somewhere very different! But is there anything he can do to keep her out of prison?

See Exclusive Photos From Inside the Daytime Emmys Nominee Reception!

Get an Inside Look at Emmy Night With Your Favorite Stars!