Spectra Fashions prepares for its big day in these spoilers from THE BOLD & THE BEAUTIFUL!

As the models touch up their hair and makeup and Saul and Darlita prep the wardrobe, Sally is eager to get the preview of the new Spectra’s first fashion show underway! “Today is the day that we give Jarrett Maxwell a show to remember.” But with Jarrett the only reporter in attendance, and under orders from Bill to sabotage the entire operation, will Sally’s first fashion show end up being her last?

Meanwhile, over at Spencer, Bill can’t wait to see the upstart design company fail so he can finally buy that building for himself. “Maybe this new version of Spectra,” suggests Katie with a smile, “will succeed.”

MUST SEE: John McCook Reveals Which Woman Was the Love of Eric’s Life on B&B! 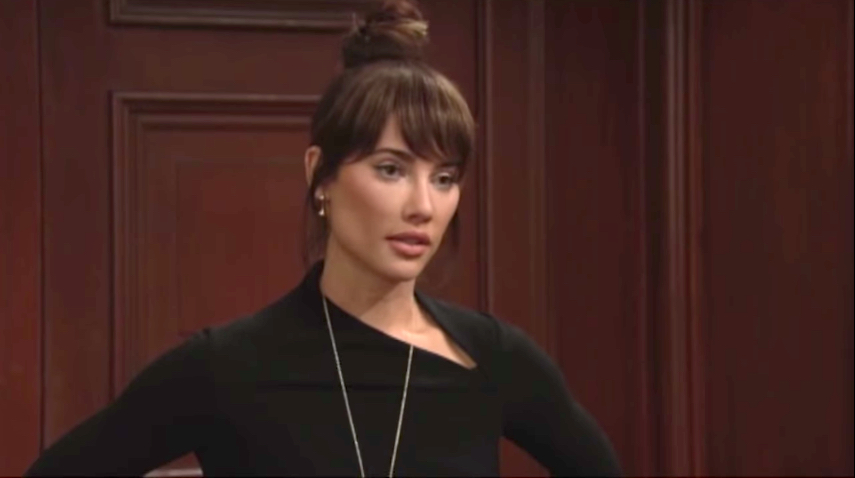 Steffy is caught between a rock and a hard place! (Photo Credit: CBS)

With Thomas feeling like a third wheel at Forrester Creations, Steffy attempts to reassure him that his talents are still valued. “Even though I’m your boss,” she reminds him, “being your sister is always going to be more important to me.” But when Thomas tries to defend the young woman he’s become smitten with, things get a little tense. “This Sally is not that Sally,” Thomas argues.

“Thomas, please!” Steffy retorts. “Think about what she’s pulled. That fight at Il Jardino, crashing Zende’s wedding… it’s like she’s trying to take over exactly where her great aunt left off.” Hearing Sally’s mischievous actions tallied up, Thomas tries to suppress a smile and fails. Can he convince Steffy that she has nothing to fear from the new Sally Spectra?

Don’t miss this tease for today’s eventful episode, and for more B&B previews, keep reading the CBS edition of Soaps In Depth magazine!