Sally Spectra continues to get it from all sides in these spoilers from THE BOLD & THE BEAUTIFUL!

Feeling terrible about letting her family steal the Forrester designs, especially since it cost her a possible relationship with Thomas, Sally continues getting hit while she’s down. First, Coco blasts her sister for using her to steal from their rivals. “Maybe I’m naive,” Coco shrugs, devastated. “But I never thought that my own sister would betray me like this.” Then Steffy pays Spectra a visit to warn Sally: “Any association you had with my family is over. It’s done, Sally Spectra.”

Meanwhile, having dumped Sally, Thomas tries to persuade R.J. that the best thing for him to do is to let his infatuation with Coco go. “We have to put the Spectra women behind us,” he insists. “Let it go. It’s what I’m doing with Sally, and it’s what you need to do with Coco.” But will R.J. listen? And is Thomas really done with Sally?

[MUST SEE: MUST SEE: Watch the Official Emmy Reels for the Lead Actress Category! 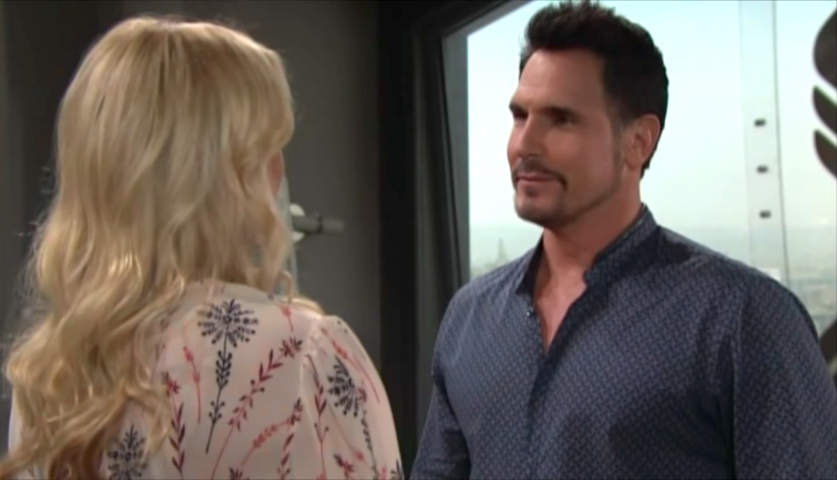 Brooke is trying his best not to gloat. (Photo Credit: CBS)

Over at Spencer, Brooke pays Bill a visit in his office, and it’s no surprise that he’s absolutely delighted that she did not tie the knot with Ridge in Australia as planned. “I don’t know what actually happened,” Bill smiles, “but I did know that Forrester would live up to his history.” Is this the right time for Bill to make yet another play for Brooke? And what would happen if Bill learned exactly what Ridge did that make Brooke dump him?

Everything You Need to Know About Watching the 2017 Daytime Emmys Live!