A terrible mistake leaves a life hanging in the balance in these spoilers from THE BOLD & THE BEAUTIFUL!

Fearing that Sheila had a weapon on her, Steffy and Liam rushed over to the hotel where Eric was hiding out to rescue him. And when Sheila reached into her bag, Steffy pulled out Stephanie’s gun and shot the villain! “Steffy, what the hell?!” Eric cries, rushing to Sheila’s side as she lays on the floor of the hotel room. “What have you done?!” Liam tries to stand in the middle of the chaos as a shaken Steffy continues to hold the gun on an unconscious Sheila. “She has a gun in her bag!” Steffy insists. Just how much damage has she done? 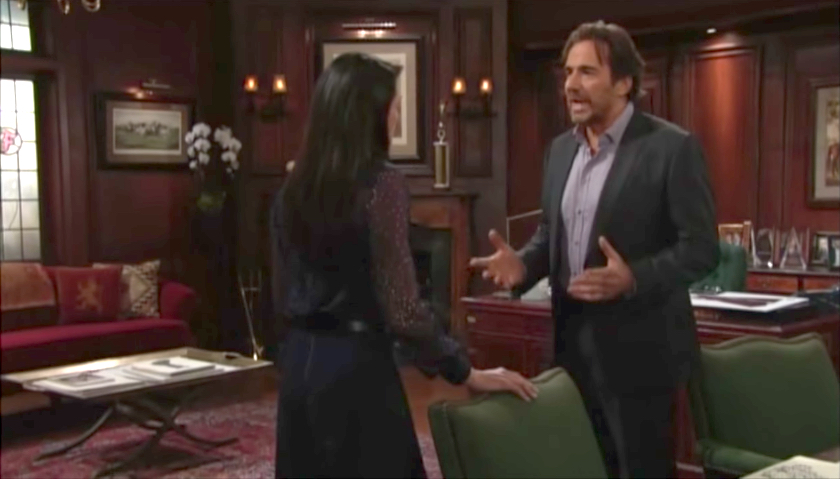 Ridge wants to hide his head in the sand! (Photo Credit: CBS)

Over at Forrester, unaware of the drama that is unfolding, Ridge worries to Quinn that his daughter will soon uncover the truth. “Steffy knows that dad moved out,” he sighs. “And before long she’s gonna put it all together.” Quinn is ready to face the music and thinks it’s time for him to do the same. “This is not a conversation I want to have with my kids,” Ridge argues. “I want to try to avoid it.” Quinn throws up her hands and declares: “A conversation that we’ve failed at having miserably!” How will Steffy react when she learns just how close Ridge and Quinn have gotten? Hopefully, she won’t still have the gun at that point!

Don’t miss this tease for today’s shocking episode, and for more B&B previews, keep reading the CBS edition of Soaps In Depth magazine!

See How the Cast of B&B Has Changed Over the Years!