Bill has gone to extremes to try and win Steffy for himself, but in these spoilers from THE BOLD & THE BEAUTIFUL, he could end up choked by his own web of lies. Can he keep Wyatt from exposing the awful truth?

As Bill’s right-hand man, Justin has done a lot of morally questionable things for his boss, but deceiving Wyatt into thinking that Steffy and Bill are still carrying on an affair is really sticking in his craw. “You used one son to break up the other brother’s marriage,” Justin complains to Bill. But in the doorway, Wyatt overhears this and is horrified to learn that his father has used him in such a way. “Is this true?” he asks, interrupting their conversation. 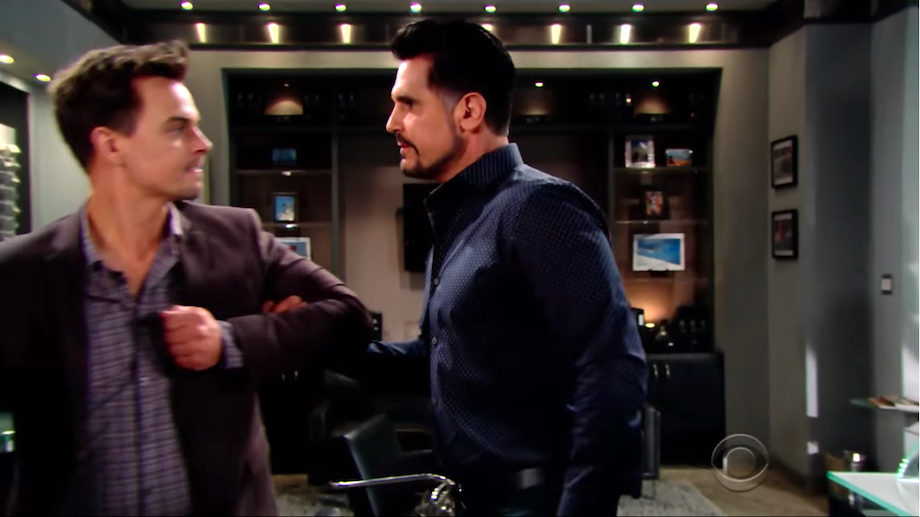 Disgusted by Bill’s actions, Wyatt wants nothing more to do with him and his schemes to steal Steffy away from Liam. “Nothing is beneath you!” he shouts at his dad. And then he makes a decision that could change everything. “He deserves to know the truth,” Wyatt insists, turning back towards the door. But Bill reaches out and grabs his son by the arm to pull him back. “You’re not going anywhere,” Dollar Bill warns.

Just how far will Bill go in order to keep Wyatt from revealing the truth? Can he keep Liam in the dark long enough for him to marry Hope? And even then, will that be enough to keep Liam from rushing back to Steffy and their unborn baby as soon as he learns she wasn’t unfaithful to him?

Don’t miss this tease for the exciting week to come, and for more B&B previews, keep reading the CBS edition of Soaps In Depth magazine!