At the Innovator of the Year ceremony, Ashley and Graham argued, prompting him to reveal that he was Brent Davis’ stepson. Shocked, Dina blurted out that Brent was Ashley’s biological father! Behind closed doors, Dina blasted Graham before collapsing! Graham left her lying on the hotel room floor, then later pretended to be surprised when he and Ashley “discovered” her unconscious mom. At the hospital, Graham told Ashley, Jack, and Traci that their mother’d had a minor stroke and, because he had her medical power of attorney, he controlled Dina’s future! Graham was relieved when Dina woke and had no memory of their fight. Meanwhile, Jack tried — and failed — to reverse Graham’s power of attorney. Graham finally agreed to let the family see Dina — for a price! Alas, when Jack cut the schemer a check in exchange for access to Dina’s hospital room, they discovered she had disappeared! After an investigation found Dina in Florida, Jack and Ashley flew there to rescue their mother. But upon arriving, they were shocked to find their mother happily having cocktails with her new friends!

Nick’s decision to give away the trust fund he’d won from Victor threw everyone into a tizzy, with The Mustache again disowning his son. When Nikki confronted her estranged hubby, he offered to end his feud with Nick if she moved back to the ranch. Furious, Nikki warned Victor that he’d never win her back through blackmail! Meanwhile, Sharon pushed Nick to mend fences with Victor for the sake of their children. At Top of the Tower, Nick told his dad that he’d donated his trust fund money to a charity that helped orphans, just like Victor had been. Victor agreed to a cease fire but suggested they stay out of each other’s way. Across town, a returning Cane revealed that Jill had hired him as acting CEO of Chancellor. Annoyed, Billy shot back with news that Victoria had hired Lily to take over Juliet’s old position at Brash & Sassy! Later, Hilary warned Cane that Jordan and Lily were getting closer with every passing day… unaware that Lily had told Jordan that she needed to focus on her children and work — not romance! Cane, on the other hand, focused on Juliet when he insisted she move in with him after the mom-to-be experienced more stomach pains! Understandably, Lily was stunned to discover her soon-to-be ex’s new roommate when she knocked on the door of the Chancellor mansion!

After yet another argument with Cane, Victoria experienced another concussion-related episode and passed out while driving! Chelsea happened to witness the accident and wanted to whisk Victoria to the hospital so she could be checked out. But Victoria flat-out refused, even going so far as to swear the fashionista to secrecy! Unfortunately, Victoria later collapsed while being interviewed for a segment on THE HILARY HOUR! 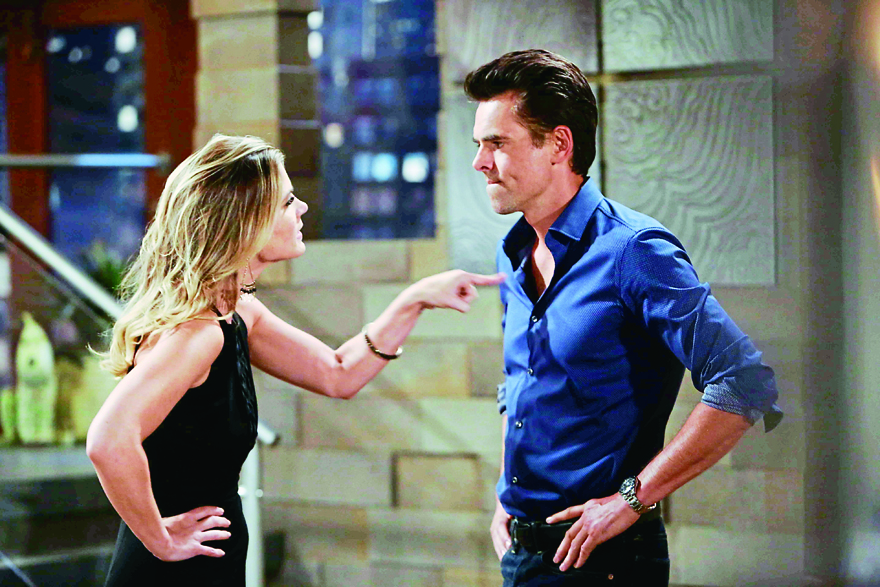 ”Billy I don’t wanna point fingers at the person who screwed up, but…” (Photo Credit: Howard Wise/jpistudios.com)

Phyllis vented to Michael about the fact that Victoria was using Billy to spy on Jabot, but the legal eagle suggested she confront her beau. After a romantic evening, Phyllis set another trap for Billy. When he fell into it, Phyllis blasted Billy and then kicked him out! Billy later tried to apologize, but Phyllis decided she needed space and convinced Jack to send her out of town on a work assignment! Across town, Tessa apologized to Mariah for sending her mixed signals about their relationship, insisting that she wanted to be with Noah. Meanwhile, Zack freaked when he learned that Scott was still investigating the sex ring. The villain invited Scott out for drinks and drugged him. When Scott awoke, he was horrified to find himself in a hotel room… with Natalia’s dead body beside him!

Y&R Stars Remember the Late Jeanne Cooper on Her Birthday