Dismayed over her brother’s decision to co-parent with his ex, Lily tried to convince Hilary to abandon the plan. Not surprisingly, Hilary refused, prompting Lily to call Hilary’s OB/GYN and cancel her appointment! At GC BUZZ, Hilary hired Charlie as an intern just to tweak Lily. Recognizing the ploy for what it was, Lily confronted her rival. During the ensuing argument, Hilary realized that her former sister-in-law had cancelled her doctor’s appointment! Cane not only supported his wife’s manipulation but offered to help her sabotage Hilary’s future attempts to get pregnant! Meanwhile, Hilar y cried on Devon’s shoulder about losing the window to get inseminated, which had her former hubby comforting her… all the way to the bedroom!

After convincing Paul not to pull the plug on the investigation, J.T. used picking up Reed from the ranch as an opportunity to snoop around Victor’s home office. Arriving home, Victor discovered the sleuth in his office, but J.T. spun a tale to cover his intrusion. Later, J.T. had another chance to sneak into The Mustache’s office, and this time he found — and pocketed — a mysterious key! Unbeknownst to J.T., he’d been caught on Victor’s hidden camera! The next day, J.T. manufactured another ruse to get into the ranch house, where he matched the key to Victor’s chessboard. Before he could open it, though, Nikki returned home. She took the opportunity to advise J.T. to be less critical of Victoria… which angered the hunk, who thought his girlfriend had been talking behind his back. J.T.’s anger soared when he returned home to find Billy picking up the kids. Victoria interrupted their argument, but after Billy left, J.T. turned on her, with his fury becoming so intense that the frightened beauty locked herself in the bathroom! Unbeknownst to them, their argument had been caught on a hidden camera that Victor had planted earlier! Calming down, J.T. apologized, and when Victoria considered breaking up with him, he countered by proposing! Upon discovering Victor was traveling to Chicago that evening, J.T. told Victoria that he wanted to get champagne… but instead headed back to the ranch for another search! 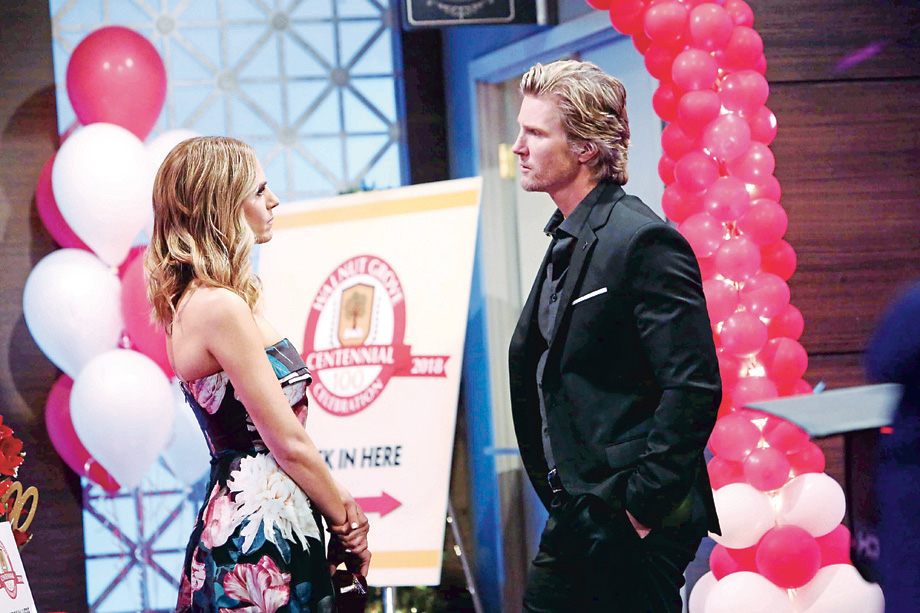 “So I’m not the only one who thought Walnut Grove was where LITTLE HOUSE ON THE PRAIRIE took place?” (Photo Credit: Howard Wise/jpistudios.com)

Could Nick Handle the Truth?

Nick fretted about his mother’s affair with Arturo, fearing Victor would go ballistic if he found out. Yet when he confronted Nikki, she shocked him with the news that she and his father had an open marriage! Despite this, Nick confronted Arturo, who promised he’d never hurt Nikki. Across town, Mariah fretted about Sharon and Nick’s relationship, but her mom denied having any romantic feelings for her ex. Yet when Nick failed to invite her to a meeting about the Rainbow Gardens housing project, Sharon suggested he move out! Nick later apologized, and the former couple began to make out! Before they could take things any further, however, Jack called saying he was looking for Nikki… because he had news about Victor!

Abby began recording Dina’s memories before her grand- mother’s Alzheimer’s made it impossible. At Newman, Ashley agreed to return to work on the condition that she be Victoria’s direct superior. Ash then stunned Jack by slapping him with a defamation of character lawsuit! Jack blamed Victor for turning Ashley against him, and then lashed out at Ashley for giving Victor ammunition to use against him! At the Walnut Grove Centennial celebration, Billy was excited to reunite with his old pals, Raul and Brittany. Lily was shocked when Mac arrived. Seeing her, J.T. demanded they discuss their impending divorce! Jill and Nikki discussed the future of Chancellor Park.

Does Phyllis Still Have Feelings for Nick?