Jack took a leave of absence from Jabot to focus on Dina. At Jabot, Ashley was touched when Billy told her that despite having no biological connection, he would always regard her as his sister. She suggested he work again at Jabot, but Billy was skeptical of whether Jack would allow it. Ashley pointed out that it was no longer their brother’s sole decision! Across town, Jack told Nikki about Dina’s Alzheimer’s… and then broke up with her! Afterwards, he wondered if Nikki might reunite with Victor. Meanwhile, Ashley called a board meeting to vote on whether Jack was fit to be CEO. Given a heads up, Jack interrupted the meeting before the vote!

Jordan retaliated against Hilary for exposing his grifter past by posting her nude photos on the Internet! After her sponsors abandoned THE HILARY HOUR, Hilary cried on Devon’s shoulder and then persuaded Jack to become a sponsor! During their meeting, Dina accused Hilary of being an intruder and threatened to call the police! At the hospital, Cane and Lily had their blood tested to see if they could donate before his new son, Sam, had surgery. Thankfully, Lily’s blood was a match! Alas, she was upset when she failed to bond with the newborn. Oddly, Hilary instantly connected with the baby!

Christine quizzed Victor about Design- Date, while Paul questioned Nick about The Underground fire. Upon investigating, Paul realized Dina had burned down the nightclub. Understandably, Nick was furious… until Paul revealed Dina’s Alzheimer’s. Later, Paul learned that the gun used to kill Zack was registered to Nikki! When he confronted her, Nikki figured out that Tessa had stolen the gun for Crystal. Upon hearing that his estranged wife’s gun was used on Zack, Victor strong-armed Nikki into revealing Tessa’s theft. Meanwhile, Tessa confided to Mariah that she’d stolen the gun for her sister. Hilary persuade Tessa to go on THE HILARY HOUR… only to then completely sandbag the songbird! After doing her best to dodge Hilary’s questions, Tessa blamed Mariah for having betrayed her confidence! As Tessa’s troubles continued to mount, Victor offered her $10,000 to leave Genoa City… and Noah! She refused, prompting The Mustache to rat her out to Paul! Interestingly, Paul offered her a deal — protection in exchange for damaging evidence against Victor. When Tessa rebuffed the deal, Paul arrested her! 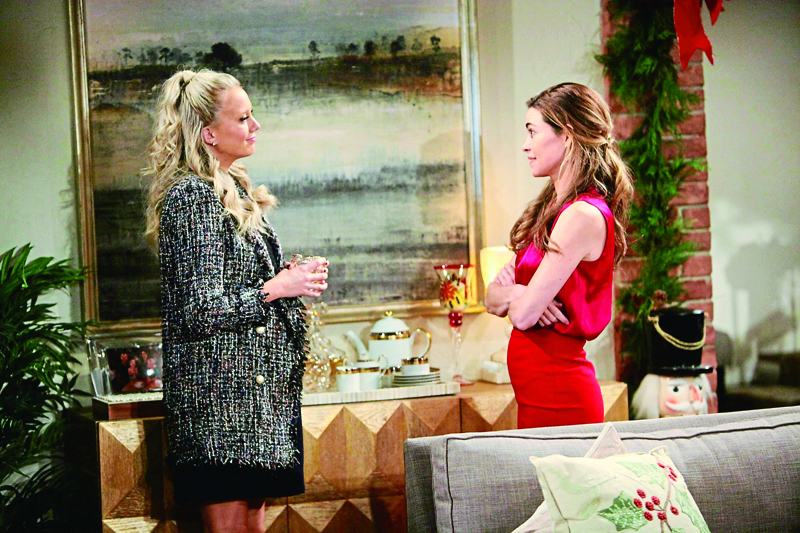 The look on Victoria’s face just screams, “I know you are… but what am I?” (Photo Credit: Howard Wise/jpistudios.com)

Victoria managed to alienate both Abby and Scott by ordering her sister to publicly take the blame for DesignDate and shutting down Scott’s Web site! Scott helped Abby prepare a speech for her press conference, but missed his date with Sharon as a result. Although annoyed, Sharon still asked Scott to move in with her! At the press conference, Abby blamed DesignDate solely on Zack, then quit Newman! Meanwhile, Victoria lured Ravi to work for Newman, enraging Ashley. When Ravi asked Ashley on a formal date, she told him she wanted to keep their relationship casual! At Newman, Victor ordered Victoria to apologize to Abby, then rehired his youngest daughter back with a lucrative contract! Despite that success, Abby got into a fight with Scott… which nearly ended in a kiss! Victor unsuccessfully tried strong-arming Chelsea into accepting his invitation to the tree lighting ceremony at the Newman ranch by reminding her of the secret of Christian’s paternity. Across town, Nikki and Nick were stunned to learn that the city was selling Chancellor Park so condos could be built on the land. When Nikki went to give Esther a heads-up, she ran into a visiting Kevin. It took her a New York minute to figure out that the computer whiz had helped Victor hack into Nick’s bank accounts!

What Happened to Juliet on Y&R?