In Hawaii, Victoria was furious to discover that J.T. had broken their agreement to stay off their cellphones and finally called it quits! Meanwhile, Nick finally figured out that his dad was trying to tell him that J.T. was behind his attack. The hunk immediately called Paul and Chris, but they were already onto the sleuth, having matched his blood to the blood found at the crime scene. Given that evidence, both Paul and Chris agreed that J.T. needed to be charged with attempted murder! Upon returning to Genoa City, Victoria engaged in a power struggle with Ashley over the future of Newman. Interestingly, Nikki shut it down by announcing that Victor had appointed her CEO until he recovered! J.T. snuck back into town and attacked Victoria. Nikki saved her daughter by bashing J.T. over the head, then Phyllis, Sharon and Victoria helped get rid of the body! Across town, Paul’s investigation led him to the video showing J.T. abusing Victoria. Unfortunately for Nikki, Paul became suspicious when he showed her the video, but she didn’t seem to care! Phyllis and Sharon also began to fret when a vengeance-hungry Nick refused to stop looking for J.T.! 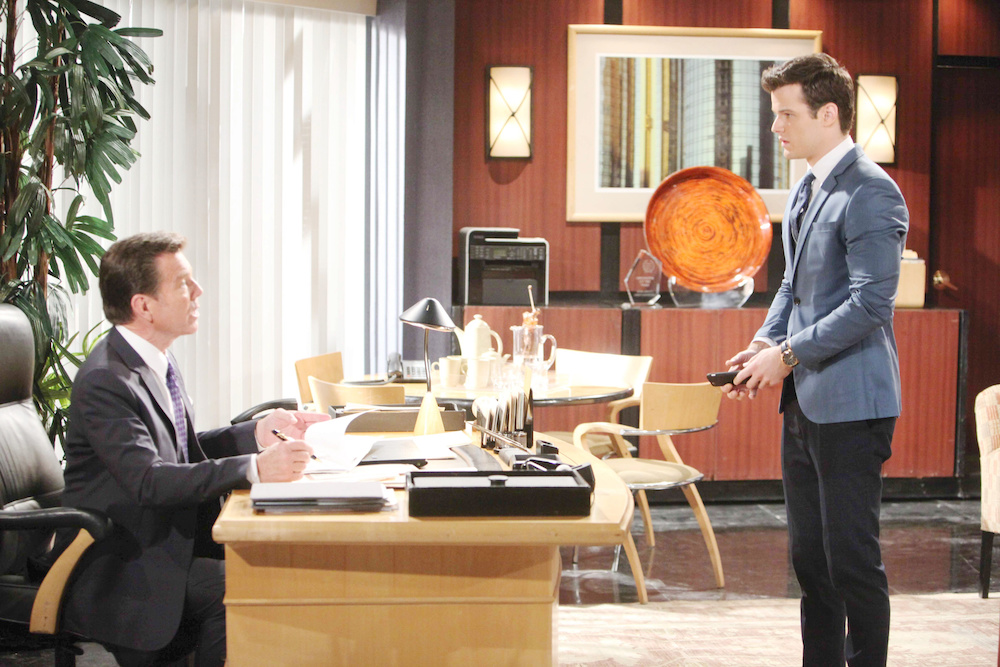 Is Jack just trying to keep Kyle close to keep an eye on him? (Photo Credit: Howard Wise/jpistudios.com)

Kyle convinced Lauren to order Phyllis to vote for his plan to take Jabot public. With J.T. being identified as Victor’s attacker, Lauren warned Kyle that his father could oust him as CEO. The hunk sped up the vote to take Jabot public. Determined to stop her nephew, Ashley was prepared to reveal Jack’s true paternity (thus proving Kyle had no claim on the family business). Thankfully, Jack returned before she made the revelation and ousted Kyle! However, Kyle weaseled his way back into his dad’s good graces, with Jack agreeing to keep him at Jabot. Jack then asked Billy to return as COO and help keep an eye on his sly son! Jack also re-hired Gloria, but fired Helen, who’d been outed as Victor’s mistress. Kyle persuaded Jack to let him move into the Abbott mansion. His presence prompted Abby and Ashley to burn the memory card of Dina confessing that Jack wasn’t John’s son. Having witnessed the burning, a curious Kyle dug the card out of the ashes. Later, Kyle approached Victor for a job at Newman, but The Mustache refused, believing the young man was more useful as a spy at Jabot! Feeling resentful, Kyle enlisted Ravi’s help to retrieve the info on the damaged memory card… and was stunned to learn Dina’s secret!

Neil was surprised by the big business moves Devon had made in his absence. A pregnant Hilary was upset when Devon admitted the whole co-parenting thing might have been a mistake. Despite agreeing to keep the news under wraps, the mom-to-be shared her news on THE HILARY HOUR. As Lily freaked, Neil insisted the family come together for the sake of the unborn baby. When not jealous of Arturo’s friendship with Abby, Nikki bragged to Victor that she had taken a young lover. Before long, Victor figured out who that lover was!

What Happened to Reed on Y&R?