Previously on THE YOUNG & THE RESTLESS:

Fed up with Victor’s machinations, Nick told Faith that her grandfather had evicted them from the ranch! Upset, Faith confronted Victor, who turned around and blasted Nick for turning the little girl against him! In a vindictive mood, The Mustache called Kevin, ordering the computer whiz to return to Genoa City to hack into Nick’s bank accounts as well as Nikki’s E-mail and phone! When Devon brought music producer Irv West to listen to Tessa, Scott recognized the man’s “girlfriend” as Natalia from the sex ring! Later, Scott observed Zack’s nervousness when he mentioned writing about the sex trafficking ring that was operating in town. When Zack shortchanged Natalia her fee, she stole Alice’s phone and messaged Tessa that Crystal was safe. Meanwhile, Mariah used Kevin as a sounding board about her feelings for Tessa. With Kevin’s encouragement, Mariah tried opening up to Tessa, but clammed up when her gal pal told her that she viewed her as family! The duo focused on saving Crystal — which meant kidnapping Alice! But when they removed their victim’s blindfold, Alice took one look at Cassie’s twin and fainted!

Graham Is Out for Revenge!

Dina promised to keep Graham away from Jabot business while maintaining her staunch support for her companion. Determined to expose the man, Ashley searched his hotel room and found a bill for a retirement home in Florida, which she traced to Graham’s supposedly dead mother, Myrna! Understandably enraged to discover Ashley in his hotel room, Graham blasted Dina for giving her daughter the key. While arguing, Dina blurted out that Ashley was not John Abbott’s biological daughter! Regretting her outburst, Dina warned Graham to keep quiet or else he would be dead to her! Armed with the information about Graham’s not-so-dead mother, Ashley and Jack discovered that she was originally from Genoa City. Meanwhile, Jack and Nikki went to the Abbott cabin, and were again caught on camera kissing! The mysterious shutterbug sent the photos to… Graham! Using Dina’s address, Graham mailed them to Victor, who showed them to Nikki. Understandably, Jack believed his mom sent the photos and confronted her. Instead of blaming Graham, Dina reiterated her opposition to Jack and Nikki’s relationship. Later, Graham pressed Dina about Brent Davis but retreated when she became agitated. Alone, he pulled out an old photo of himself as a youth… next to Brent Davis! Then he called his mom, promising that they’d have their revenge against the Abbotts! 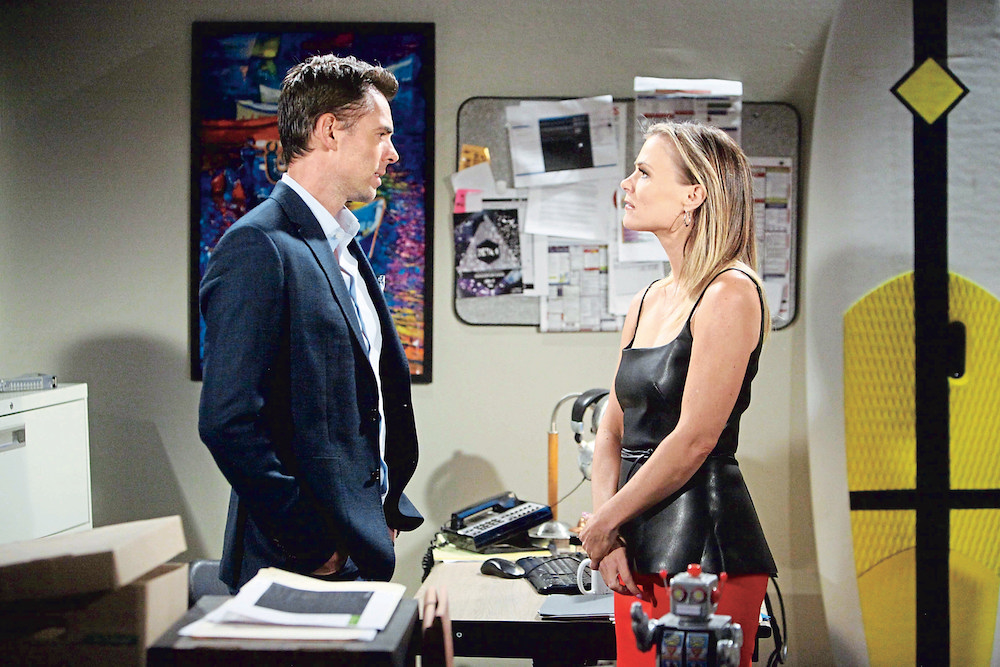 Billy may no longer gamble, but he still gets to use his poker face. (Photo Credit: Howard Wise/jpistudios.com)

Billy and Phyllis vowed not to let their competing business interests come between them. Of course, that didn’t stop Billy from illegally downloading Jabot info off her computer! The snooping revealed Jack’s plan to relaunch Jabot Junior. Meanwhile, Victoria accepted Victor’s offer to take over a skincare line he’d secretly developed. Across town, Ravi discovered Jabot’s security breach, which had Jack pointing the finger at Billy while Ashley believed Graham to be the guilty party. Interestingly, Jack turned down Ravi’s offer to install tougher security measures!

Desperate to save their marriage, Cane convinced Lily to go to counseling. Ironically, the sessions reminded her about all the times he’d lied to her! Despite still loving her husband, Lily admitted she believed their marriage was over! Upset, Cane shared the news with Juliet… and then they kissed! Across town, Jordan confided to Chelsea his feelings for Lily. Instead of approving, Chelsea reminded him that Lily was too vulnerable to start a new relationship. Which was just as well, since Jordan found himself getting aroused by Hilary again! Juliet began cramping and was rushed to the hospital, where the doctor told her there were complications with the pregnancy. Yet when Cane arrived, she claimed that all was well!