Abby unwittingly told Scott that Alco — the company behind tearing down Chancellor Park — was a Newman entity. Scott shared the news with Nick, who confronted Victoria. When she admitted to being behind Alco, he accused her of turning into their father! At Chancellor Park, Scott confessed to Abby that he’d leaked the Alco info to Sharon and Nick. As they argued, Scott yanked Abby into a kiss — unaware that Faith saw them! Upset, the little girl told Mariah, who confronted Scott about his betrayal. Scott begged her to not tell Sharon. She agreed, but warned Scott that she’d be watching him!

Michael notified Victor that Newman was about to be audited, and then asked Kevin to dig into the matter. After blowing off his big brother, Kevin warned Nikki, who’d been stealing Victor’s money! Nikki promised to protect Kevin’s role in her thievery, but suggested he get out of town, pronto! Next, she confessed to a stunned Victoria that she was responsible for Newman’s disappearing funds! The hits just kept coming for Victoria, who was bowled over when J.T. showed up, announcing that he was the special investigator assigned to handle the audit! J.T. told Victoria that her father had been transferring money offshore, prompting her to reveal that Nikki was the real culprit! J.T. agreed to hide his former mother-in-law’s theft from Paul and Christine. Alas, Victor soon discovered what was going on and offered his wife a deal — she returns to the ranch and pretends to be happily married and he won’t send her to jail! Nikki agreed, but told him that she couldn’t return his money — she’d already spent it on Chancellor Park! 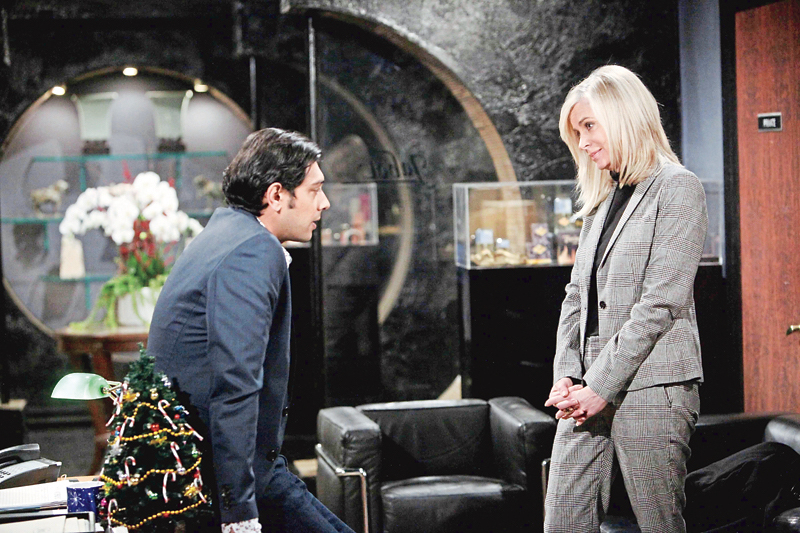 Look what Ashley found under — or at least next to — her Christmas tree! (Photo Credit: Howard Wise/jpistudios.com)

Jack Got the Boot!

Ashley was upset when she tried to bond with Dina, but her mom forgot their special time together. On the business front, Ashley was furious when Victoria tried to lure Ravi to Newman. Ash nixed Ravi jumping ship by whipping out his non-compete clause! Ravi told Ashley that he’d only considered the job to give their relationship a chance outside of Jabot. A shocked Ashley realized Ravi wanted to take their relationship to the next level… and broke up with him! Meanwhile, Jack offered to redesign the lab. Ashley recognized her brother’s generosity was actually about getting her out of the CEO position. Jill zipped back to Genoa City for Christmas — and considered putting Chancellor on the auction block. Jack immediately put in a bid, which annoyed Ashley, who felt he was already overwhelmed with taking care of Dina and his duties at Jabot. In fact, Ashley decided to oust Jack from Jabot. Shockingly, Kyle’s proxy vote tipped the balance against his father! While Jack was sent reeling by his son’s betrayal, Billy encouraged Ashley to serve as Jabot’s interim CEO until a successor was hired.

Cane tried to mend his relationship with Mattie and Charlie. While Charlie was ready to forgive his dad, Mattie needed more time. Lily was taken aback when Cane was too distracted to talk with her — and even declined her invitation to dinner! She fretted that her hubby might be moving on, especially when she observed how tight he was with Hilary. Yet when Lily confronted her rival, Hilary insisted she had no designs on the Aussie! Meanwhile, Cane was shocked to run into J.T. at the GCAC. Cane informed Victoria’s ex that their kids were now dating. After J.T. confided that Reed had been avoiding him for a while, Cane called Mattie, inviting his daughter and Reed to join him at the GCAC, where J.T. asked his son to give him another chance!

Remembering the Daytime Stars Who Died in 2017

All the Beautiful Babies Born to Soap Stars This Year