After spending Christmas Eve with Paul and Christine, Nikki warned Victor that they didn’t believe their reconciliation was real. Victor had a solution — they needed to renew their vows on New Year’s Eve! Interestingly, during the ceremony, Nikki and Victor got caught up in the mood and were reminded why they’d loved each other for decades! Meanwhile, Nick accidentally spied Abby and Scott sharing a New Year’s Eve kiss! The next day, Nick told Abby what he’d seen, then told Sharon… who didn’t believe him! Unfortunately for Scott, Mariah confirmed Nick’s story, prompting a furious Sharon to zip over to the GCAC to confront Abby! Lauren and Chelsea were forced to break up the resulting catfight, with Sharon stunning Scott’s mother by revealing what he’d done! Later, Sharon tossed Scott’s clothes out of her place and was surprised when an engagement ring fell out of her ex-beau’s pocket. Alas, that didn’t stop her from kicking him out!

On Christmas Eve, Jack and Ashley fought over her attempt to oust him from Jabot. Later, Ashley attempted to make amends but was stunned when Jack revealed he’d added a clause to the company by-laws reading that only a blood Abbott could run Jabot! Furious, Ashley hired a lawyer to sue, but eventually, the siblings agreed to settle their differences outside the courtroom. Meanwhile, Chelsea brought Christian and Connor to her meeting with Lauren at the GCAC, but freaked when Christian disappeared. Upon arriving, Nick blamed Chelsea for losing his son! At the Abbott’s, Jack and Ashley were stunned when they realized Dina had taken the boy, mistaking him for a much younger Jack. Jack called Nick, who coaxed a tearful Dina into giving back Christian! 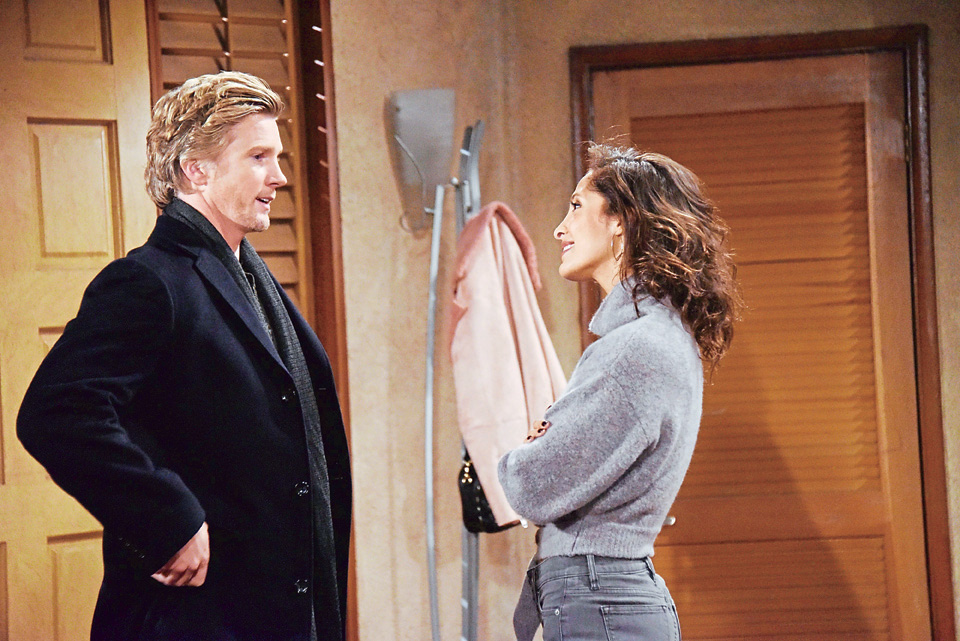 ”What’s the point of having friends with mansions if they won’t let pals bunk there?” (Photo Credit: XJJohnson/jpistudios.com)

Jill joined forces with Devon to bring Cane, Lily, Mattie, and Charlie together for Christmas. Later, Jill negotiated to sell Chancellor to Jack, but only if Cane remained as CEO. Yet when Jill learned about all the family drama at the Abbott household, she stopped the sale, making Billy and Cane co-CEO’s instead! Across town, J.T. told his son that he and Mac were divorcing, prompting an upset Reed to get drunk… and arrested with a DUI! A concerned J.T. decided to stay in town to help Reed. Hearing about her grandson’s troubles, Nikki visited Reed and warned him against making the same mistakes with alcohol that she had. On New Year’s Eve, Jill invited Cane and Lily to ring in 2018 — but the party was a ploy to reunite the estranged couple. The scheme nearly worked, with Cane and Lily almost kissing at the stroke of midnight!

Home for the Holidays

Nick offered to build a dream home for Chelsea and their family, but she admitted that she wasn’t ready to let go of the memories she’d shared with Adam in the penthouse! Meanwhile, Lily and J.T. reconnected over the angst involved in raising teenagers. When she learned that his job for Paul had ended, Lily asked Cane to give J.T. a job and a place to stay at the Chancellor mansion!

See How Your Favorite Stars Rang in the New Year

Daniel Goddard Wants to Get Physical With Y&R Fans!