A kidnapped Alice mistook Mariah for Cassie and immediately passed out. Recognizing that this case of mistaken identity might be useful, Mariah convinced Sharon to assist her in gaslighting Alice into helping them find Crystal. The scheme worked, with Alice calling Leon to bring Crystal back to town. Although the thug complied, he spotted Sharon, Mariah and Tessa hiding, which caused a scuffle — until Alice grabbed Leon’s gun and forced him to turn over Crystal! Tessa was thrilled to finally be reunited with her sister, but had to say farewell when Paul placed Crystal in Witness Protection until she could testify against the sex ring operators! At the GCAC, Zack fretted when Alice didn’t return his calls, prompting him to snap at Abby! Alice took Sharon’s advice to cut ties with the sex ring, but wound up being run down by a car only seconds after realizing that Zack had paid her off with fake money. Sharon rushed to the hospital where Alice was taken, but was shocked to find her room empty and Alice missing! Meanwhile, Devon misinterpreted Kevin’s lack of enthusiasm over his relationship with Mariah, believing her BFF might be jealous. Later, the billionaire shared his awkward encounter with Mariah, who freaked that Kevin might have told Devon about her feelings for Tessa.

Victor pressured Kevin to hack into Nick’s bank account and drain his funds! Upon discovering his money was missing, Nick immediately suspected his father was responsible but couldn’t prove it. Victor also ordered Kevin to monitor Nikki’s phone and E-mail. Later, Nick went on THE HILARY HOUR and shocked his entire family by announcing that he intended to give away all of his trust fund money to charity! 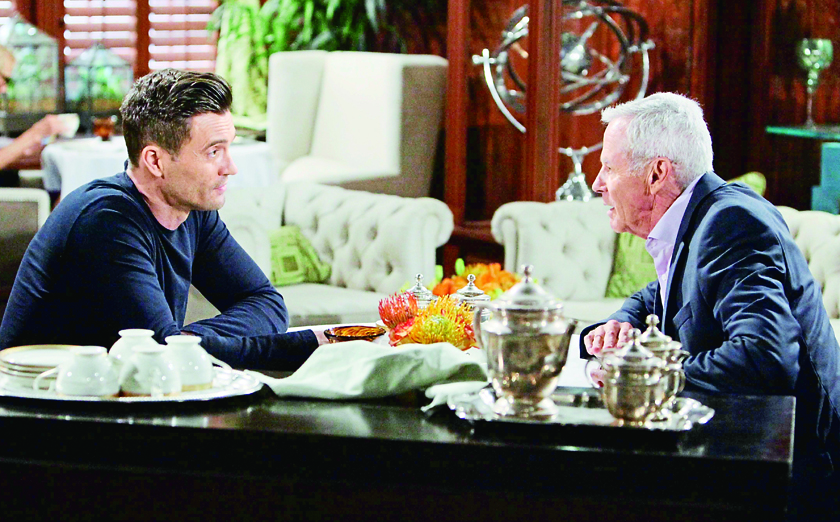 ”Dad, I don’t think you’re supposed to be proud of me for lying to my wife.” (Photo Credit: Howard Wise/jpistudios.com)

Lily had Michael tell Cane that she wanted a divorce. After receiving the divorce papers, Cane accused Jordan of making a move on Lily! Meanwhile, Hilary visited Lily to say that Cane was devastated over the breakup of his marriage. But Lily called her nemesis out, saying she believed Hilary’s real concern was about losing Jordan! Later, the twins were devastated when their parents told them about the divorce. On a more positive note, Lily was thrilled when Victoria hired her to do Juliet’s former job at Brash & Sassy! Colin returned for a quick visit to meet Juliet, and suggest Cane ask Jill for a job at Chancellor!

Dina became flustered when Jack questioned her about the pictures that had been sent to Victor. As a result, Jack suspected Graham might be responsible! When Ashley was named Innovator Of The Year, Jack decided to throw a party for his sis… but upset the guest of honor by leaving Billy off the guest list! Jack suggested Ashley invite Billy herself — and maybe snoop around Brash & Sassy when she invited him! Wanting Ashley’s party to be a family feud-free zone, Billy offered his brother an olive branch — which Jack promptly snapped in half! Upset, Billy ignored Victoria’s warning and continued to use Phyllis’ computer to spy on Jabot. Ticked, Jack ordered Ravi to up security, finally telling Phyllis that her beau was using her laptop to spy on Jabot! Of course, Phyllis refused to believe Billy would take advantage of their relationship. To prove it, she set a trap… and was stunned when Billy took the bait! Traci came to town for Ashley’s party. When Ashley revealed that Graham had gone to school in Genoa City, Traci dug out an old yearbook which identified him as “Graham Davis”!