Victor offered to throw a party celebrating Abby’s success with her DesignDate app. Yet when news leaked that he’d acquired Brash & Sassy, The Mustache used the party to celebrate Victoria’s new position as COO of Newman, instead! Unfortunately, Crystal crashed the party, publicly revealing that DesignDate was a front for a sex ring — and Zack was the ringleader! In the commotion, Dina argued with Nikki — then stabbed her! Thankfully, the injury wasn’t serious, but by the time Nikki told Ashley about her mother’s bizarre behavior, Dina had disappeared. Still reeling from Crystal’s accusation, Abby allowed Zack to hustle her out of the party. Alas, by the time she came to her senses, Zack had driven her to his storage unit and locked her inside! Unbeknownst to Zack, Dina had hidden in his backseat and then wandered away! Later, Scott attempted to rescue Abby, but Zack locked him in the storage unit as well. Trapped, Scott and Abby succumbed to passion! Afterwards, they agreed that making love had been a mistake. Across town, Dina was found and led Paul to the storage unit. But Abby and Scott had already escaped and followed the trail to Zack’s motel. Before they could get help, Zack returned. The villain threatened to shoot them, but before he could pull the trigger, Crystal arrived and shot Zack dead!

A Diagnosis and a Death!

Aware that Dina’s behavior was bizarre, Jack brought in Dr. Berg to examine her. Alas, Jack and Ashley were given the devastating news — Dina had Alzheimer’s! When Nikki arrived to discuss Dina’s violent outburst, Jack dismissed her concerns and then disinvited her to Thanksgiving Day dinner! Later, Ashley and Jack were stunned when Dina revealed that she’d known she’d had the disease for a year. Traci returned home for Thanksgiving and was delighted to learn that Billy was back in the family fold. Alas, Ashley and Jack revealed the devastating news about their mom’s Alzheimer’s. Across town, Juliet tried to speak at Cane and Lily’s divorce hearing, but an annoyed Lily kicked her rival out of the courtroom! Alas, Juliet went into labor and was rushed to the hospital. Upon arriving, Cane and Lily were stunned to learn that Juliet had died in childbirth! Lily suggested that Cane call his newborn son Sam in honor of his late sister. 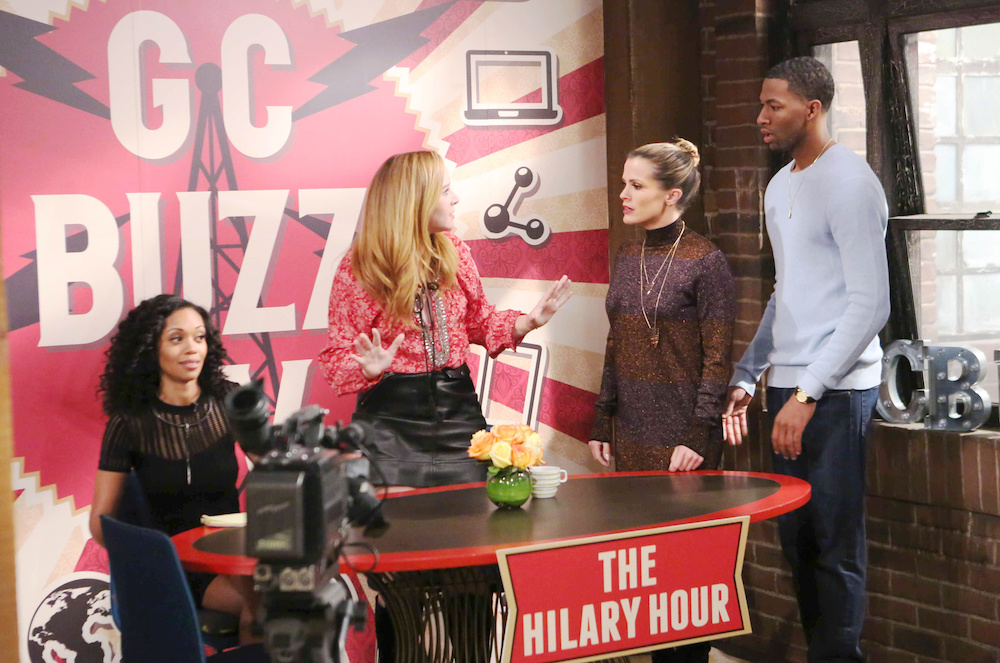 Two minutes into THE HILARY HOUR and Jordan and Chelsea were over it. (Photo Credit: Howard Wise/jpistudios.com)

Abby fretted to her dad that she felt guilty about Zack’s death. Although Victor insisted it hadn’t been her fault, he admitted to being concerned about her questionable judgment! Across town, Sharon quizzed Scott about his ordeal. Even though he opened up about his feelings, he kept quiet about doing the horizontal tango with Abby! Later, Scott and Abby found a new bond — their mutual animosity against Victoria when she shut down Scott’s Web site and demoted Abby! Later, Victoria hired Lily to join her at Newman. Alas, the company was rocked when the FBI launched an investigation into the DesignDate app and confiscated all their computers!

Hilary used her show to expose Jordan and Chelsea’s past as grifters! When Nick learned he was under suspicion for arson, he blamed Chelsea’s past as a con artist, thinking it had triggered the investigation — which didn’t sit well with the fashionista! Tensions continued to rise when Chelsea took the boys to Thanksgiving at the ranch. Nikki convinced Nick to crash the party, where he apologized to Chelsea. Later, Billy invited Chelsea, Nick, and Phyllis on an impromptu trip to New Orleans. While there, Billy and Phyllis reconciled! Meanwhile, Mariah broke up with Devon when he began questioning her friendship with Tessa!