Scott was stunned when he woke up in a motel room with Natalia dead beside him! He called Victor, who said that he would handle the situation… but then called Paul, who arrived at the motel with the police! Even though Scott shared his suspicions that Zack had set him up, Paul arrested him for solicitation. When Lauren got wind of her son’s arrest, she blamed Sharon. Across town, Zack wooed Abby… all the way into bed! Meanwhile, Scott and Sharon discovered Natalia’s profile was on Zack’s app, Design Date, prompting him to confront the slime ball. Not surprisingly, Zack denied everything. Later, Sharon was shocked when Mariah admitted her feelings for Tessa!

Billy’s Got a Theory

After collapsing, Victoria was rushed to the hospital, where she was diagnosed with poisoning! The culprit? The Brash & Sassy face mask she’d been testing on herself! Billy accused Jack and Gloria of sabotaging the product. After being released from the hospital, Victoria had a whole new headache — the FDA, which pulled all of their products off the shelves and investigated the company! Victor offered to buy the company, but Victoria tried to get another loan from Hamilton-Winters. Alas, Devon turned her down. At Jabot, Ashley ran tests on the Brash & Sassy masks and discovered they’d been made with illegal chemicals. Meanwhile, Abby was unhappy to learn that Victoria and Victor were meeting secretly. 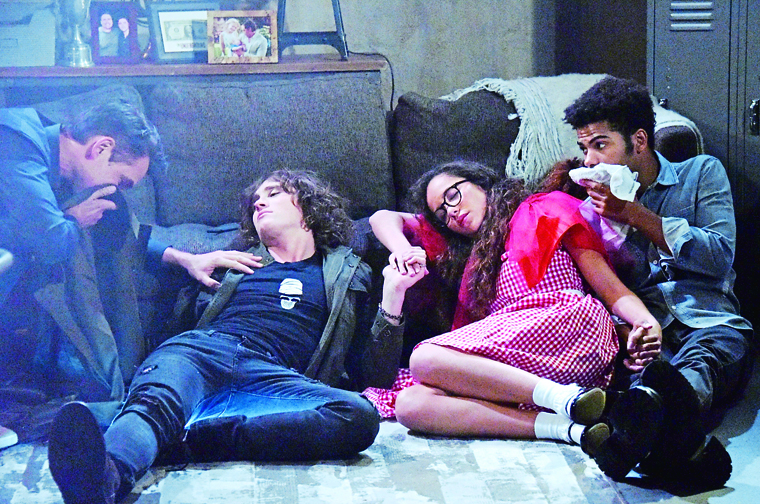 Jack and Ashley flew to Florida, where they were shocked to find Dina happily socializing with new friends. When the matriarch saw her children, she told them that she never wanted to see them again! Yet the next day, Dina embraced her confused children! Ashley soon realized her mom had no memory of blabbing about Brent Davis. When Graham attempted to intercede, Jack told the scoundrel that his power of attorney was worthless and threatened to have him arrested for fraud! Later, Ashley and Jack convinced their mother to return to Genoa City. On Halloween, Mattie persuaded Cane to let her throw a party at the Chancellor mansion, but was horrified when he stayed to be chaperone! Mattie, Charlie, and Reed snuck into The Underground to throw a parentless party, but were forced to hide when Nick arrived to brood. After he left, Dina arrived, and burned a photo of Brent. Alas, she left, unaware that The Underground was ablaze with the kids inside! Cane and Billy raced over when the teens called them. Billy managed to rescue the teens, but was trapped in the inferno! Upon arriving, Jack saved Billy, and they agreed to put the past behind them. Victoria was thrilled her ex was alive… then fired Billy for being responsible for the tainted face mask!

Hilary enlisted Phyllis’ help to distract Jordan while she snuck into his place to dig up dirt on him. She found his stash of fake I.D.s, which she exposed on her show! Billy unpacked his bags at the Chancellor mansion when Phyllis refused to take him back. Not surprisingly, Cane and Billy began bickering about being roommates, but put aside their differences for Juliet’s sake. Later, the guys got drunk together, then went their separate ways — Cane to beg Lily for another chance, and Billy to Phyllis’ place. Both men were arrested for disorderly conduct! The next day, Lily nearly took her hubby back at their divorce hearing, but changed her mind when Juliet interrupted to plead Cane’s case! Neil and Devon purchased a public relations firm, which Neil decided to run. Their first client? Victor!