It’s going to take a miracle for Hilary to pull through in these THE YOUNG & THE RESTLESS spoilers, so Devon does the one thing he can think of to make her happy again. Plus, Mariah and Tessa are already having problems and Nick and Phyllis have a massive secret to keep!

After their unexpected night of passion, Nick and Phyllis are having major regrets. “This,” Nick stammers, “will be our secret.” Phyllis agrees, adding: “Never to be spoken of again.” But as they both attempt to make things work with their significant others, will these two really be able to keep their ill-advised sexual encounter a secret from Sharon and Billy? 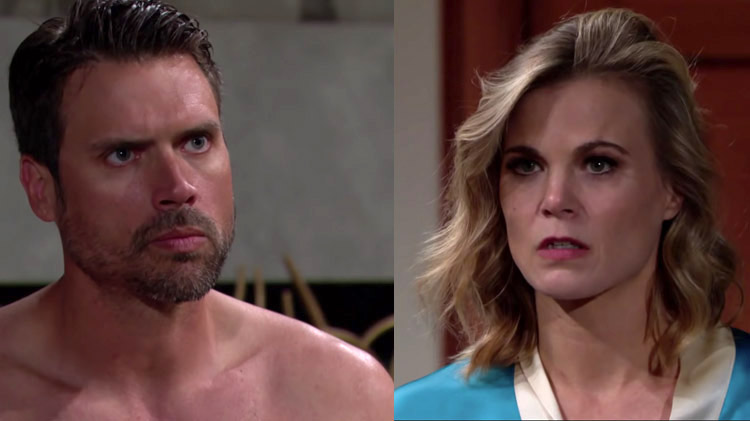 Nick and Phyllis have a whopper of a secret that could blow their lives apart! (Photo Credit: CBS)

After they were pushed back together, Mariah and Tessa decided to give a relationship another try, but after a successful date, Mariah caught the brunette embracing another woman. “I’m worried about you,” Tessa tells Mariah, who snaps back: “Well, you know, I can’t really believe a word that comes out of your mouth these days!” Is Mariah jumping to conclusions, or does she really have something to worry about?

Because Mariah, like the Winters family, is also worried about Hilary, who is clinging to life following the horrific car accident. “Nothing and no one can save her,” Nate cautions Devon, who simply can’t bring himself to give up on the woman he loves. “Maybe we might get that miracle that you’re talking about,” he cries. Unfortunately, as everyone pays Hilary a visit to urge her to fight for her life, things are not looking good. “Hilary doesn’t know about her condition,” Devon confesses to Lily in the waiting area. And later, sitting at her bedside, he decides to do whatever he can to keep her spirits up. “I want you to be my wife again,” he says gently. “As soon as possible.” Is there anything that can be done to save Hilary’s life?

Don’t miss these teasers for the emotional week to come and for more Y&R previews, keep reading the CBS edition of Soaps In Depth magazine!

Mishael Morgan Announces Her Pregnancy With an Adorable Gender Reveal!