Jack is stunned to find a clue to the identity of his real father in these THE YOUNG & THE RESTLESS spoilers. And even as Nick makes a move to cement his future with Sharon, Victoria’s past comes back to haunt her as someone threatens to expose her murderous secret!

Opening the safety deposit box with the key he discovered leads Jack to discover an old photo that could reveal who his biological father is. “Phillip Chancellor could be my father,” Jack confides to Kyle. And when Neil reports to Cane what Jack is up to, they close ranks. “Jack is after a stake in Chancellor,” Neil warns. So Cane stands his ground and declares: “Then it’s war.”

When Summer has some friends over to play cards, Billy can’t resist asking them to deal him in, despite his gambling addiction. Later, Summer stands next to a guilty-looking Billy on the stairs and smiles: “Looks like someone’s a naughty boy. This card game can be our little secret.” Now that she has the leverage over Billy, what will she do with it? And despite their relationship being kaput, Summer has also been spending a lot of time with Kyle since her return. Mariah discovers the pair hanging out at the Dive Bar, taking in the sun. “So I’m guessing it’s casual Wednesday,” the redhead snarks. “And by casual, I mean semi-nude.” 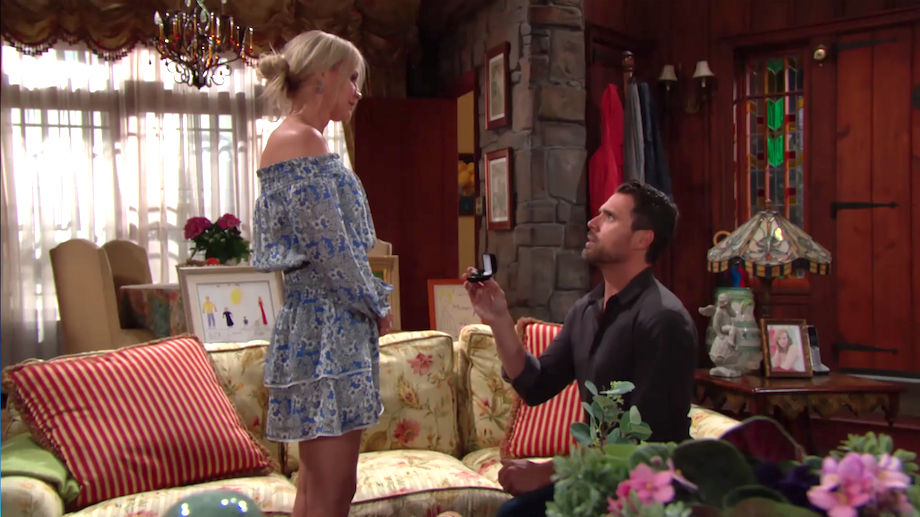 How will Sharon respond to Nick’s proposal? (Photo Credit: CBS)

Nick is determined to regain custody of Christian, but Sharon feels like it’s her bad reputation that is causing Victor to win. However, Nick refuses to accept that and decides to take a drastic step to form the perfect family for Christian to return to. “Mary me, Sharon,” he pleads, dropping to his knee and presenting her with a ring. Is this the right move?

Watching Arturo dance with Ashley at Dive Bar, Nikki cautions Abby to be careful. “The man works fast,” she taunts. “Maybe your mother will be his next conquest.” And when Abby finds a bra on the couch, will she jump to the wrong conclusion about her beau?

Victoria has been trying to put J.T.’s death and coverup behind her and move on with her life, but it’s not going to be that easy. Alone in her office, she listens to a threatening message on her laptop that could send her house of cards crashing down around her. “Hello,” says the electronically disguised voice. “I’m sorry to tell you your secrets aren’t safe anymore.” Who is threatening Victoria, and what do they want in exchange for their silence?

Abhi Sinha Mourns the Loss of His Beloved Pet