It’s a series of unfortunate surprises in these spoilers from THE YOUNG & THE RESTLESS!

Nick takes the plunge and tries asking Chelsea out, but she grimaces. “I don’t think that that would be such a good idea,” she admits. “Don’t you know what today is?” Nick looks confused and searches his memory for what anniversary it could be, but Chelsea reminds him, “It’s Valentine’s Day.” Has Nick blown his chance with Chelsea by trying to invite her on a casual date… on the most romantic day of the year?

Ever since Dylan left her, Sharon has been in rough shape, and she’s clearly nearing the end of her rope. Sitting down with Victor, the distraught woman begs, “If you really want to help me, take me to Dylan.” Would Sharon really leave behind all her loved ones in Genoa City to live in hiding with Dylan? And is that even an option?

MUST SEE: CBS Daytime Stars Past and Present Join Together For Epic Photo Shoot! 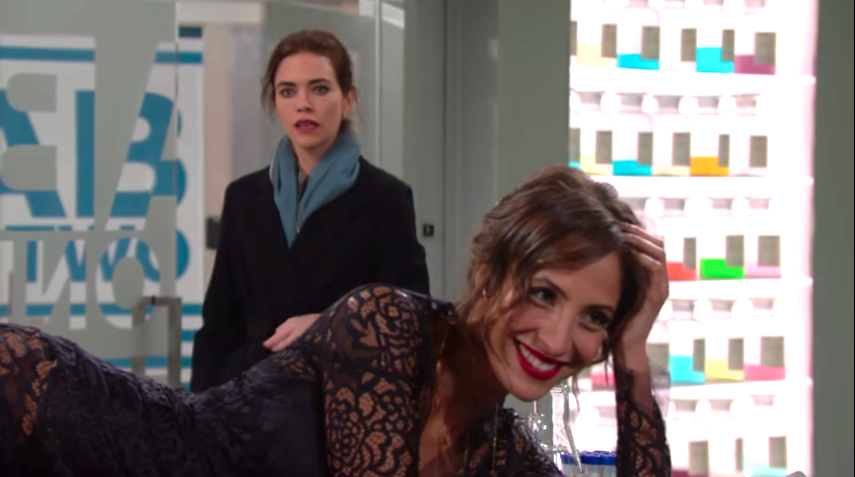 Victoria is stunned by what’s going on in the lab! (Photo Credit: CBS)

Doing a sexy photo shoot in the Brash & Sassy lab, Lily poses seductively in black lingerie on the table as a photographer jokes, “You’re making me want to memorize the periodic tables.” But just at that moment, Victoria walks in and is horrified at what she sees. “What the hell is going on?” she asks angrily. Cane and Billy’s smiles quickly fade at her arrival. Are they all going to be able to work together… especially once Victoria is in charge of the company?