It’s a clash of the titans in these spoilers from THE YOUNG & THE RESTLESS!

Not everybody is thrilled about Nikki’s triumphant performance at the benefit concert. Sure, Nick is happy that his mother played beautifully and everything turned out okay, but he’s still furious at Victor for forcing her to perform while her MS was flaring up. “Mom dared to tell The Great Victor Newman what she thought of him,” Nick barks at his father in the parking garage, unaware that their argument is being recorded. “You’re arrogant and heartless!” Hilary and Howard are hiding behind a car angling their video camera to capture all the action, but they may not be prepared for how nasty this fight is going to get! 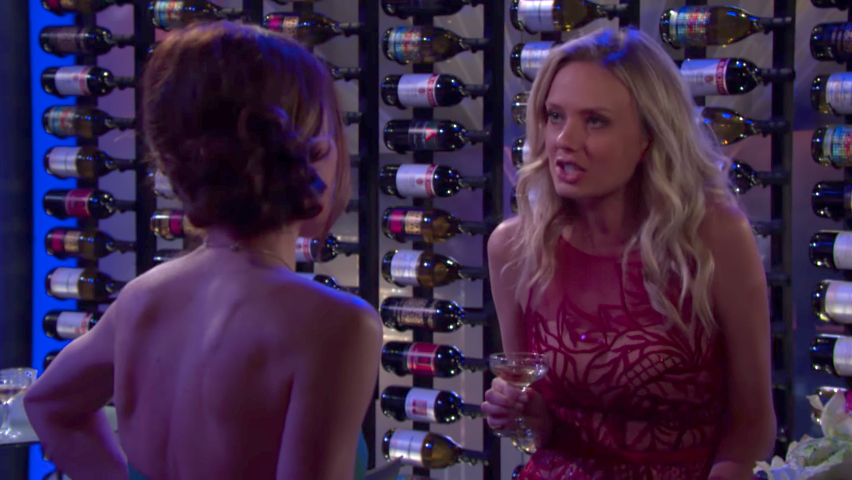 Never pick a fight with a woman holding a drink! (Photo Credit: CBS)

Meanwhile, at the party following the concert, Abby unleashes her pent up anger on Victoria! “I am sick of you treating me like I’m six years old!” she cries. With her hand on her hip, Victoria haughtily replies, “Well, then stop acting like one!” But Abby is holding a glass of champagne, so we think we can see where this is going… And we really liked Victoria’s dress, too!

It may be a little quieter back at home where Billy decides to bring his kids, Johnny and Katie, in on his newest relationship. “You two remember my friend, Phyllis, right?” he asks the tykes. “She’s very special to me.” Phyllis leans in and smiles at the children, then glances up at Billy hopefully. Will Johnny and Katie accept a new woman in their dad’s life?

Michael Muhney Speaks Out on Rumors of a Y&R Return!