Mysteries deepen, a new relationship sparks, and an old friend returns to Genoa City in these THE YOUNG & THE RESTLESS spoilers! But with all the fireworks going off on the Fourth of July, don’t let that distract you from the drama!

Neil is thrilled to see a familiar face open the door as Nate Hastings, Jr. walks in! “Well, it looks like I’m in the right place!” Nate smiles. Neil opens his arms and rushes to embrace his godson. “Come here, man!” Although Nate later has a very different run-in with Hilary when he opens his door to her while half-naked! “Hi!’ she exclaims, giving him a solid once-over. 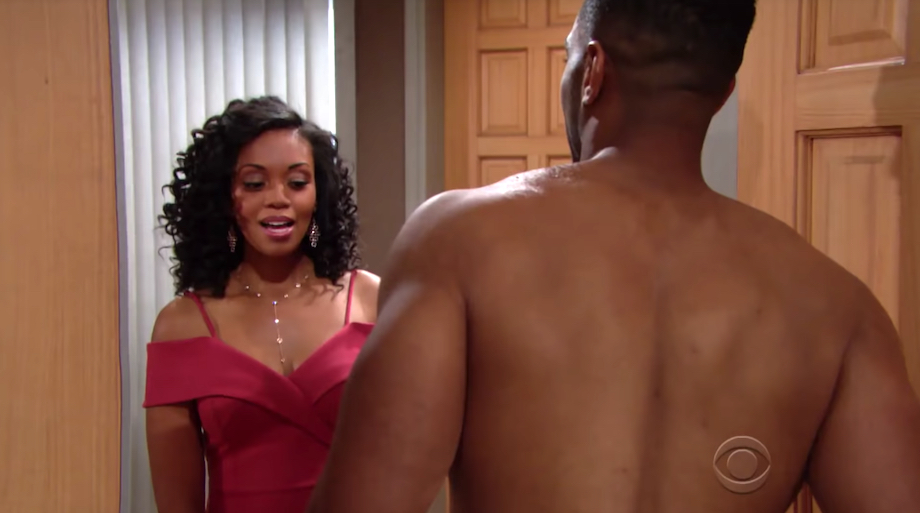 Hilary gets quite an eyeful! (Photo Credit: CBS)

Abby has been reluctant to get involved with Arturo, and every little thing seemed to put her off the hunk, but now it seems like she’s finally giving in to her feelings as the pair finally hit the sheets. But are they really ready to take this relationship to the next level, or will this turn out to have been a terrible mistake? Because Nikki is not thrilled to see them together. “No one messes with Nikki Newman,” she vows.

Ashley makes a startling announcement: “I want to come back to Jabot,” she smiles sweetly. But will she be welcomed back? What is she really after?

With evidence mounting that seems to indicate that J.T. is still alive, Phyllis has urged Nikki, Sharon, and Victoria that they have to dig up the grave to prove that his body is still down there. Unfortunately that proved easier said than done, and the women still have no answers. They’re all naturally on edge, but what do Nikki and Sharon see out the window that causes them to scream like that?

Check out these teasers for the exciting week to come, and for more Y&R previews, keep reading the CBS edition of Soaps In Depth magazine!