It’s Nikki’s big night in these spoilers from THE YOUNG & THE RESTLESS, but will she actually take the stage? If Victor has anything to say about it, she will!

As Nikki sits backstage nursing her crippled hands, Tessa pops in holding her guitar and learns about the sound board problem that threatens to put the kibosh on the entire show. “Maybe the universe is trying to cut you a break,” Tessa suggests. “You won’t have to play through the pain after all.” Nikki has been insisting on performing come hell or high water, but might she take this opportunity to back out?

MUST SEE: Elizabeth Hendrickson Reveals What’s Next After Chloe! 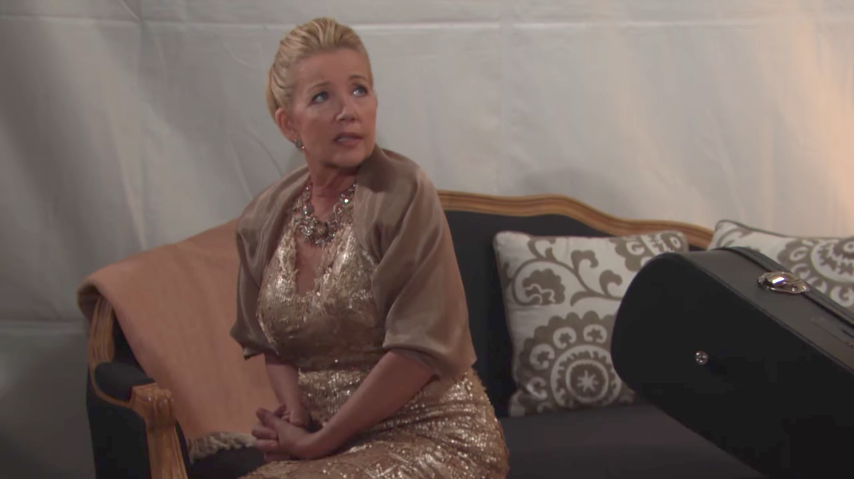 Nikki’s putting on a brave face, but now she doesn’t have to! (Photo Credit: CBS)

Abby is furious that the show she’s trying to help put together is falling apart around her, and Victoria’s needling is definitely not helping! “If you do not know how to fix the audio board,” Abby barks at her sister, “then you’re not needed back here.” This event was supposed to bring the Newman family together, but it seems to be having the exact opposite effect!

Determined to keep his mother from having to suffer by playing piano on stage, Nick was secretly delighted when his sabotage of the sound equipment worked like a charm. But his spirits are deflated when Victor insists that he inform the crowd that everything is under control. “How can I tell everyone that the show’s gonna go on?” Nick asks. “Much less on time?” Standing there with a stern expression on his face, Victor replies simply: “Because it will.” What does he have up his sleeve?

Everything We Know About Y&R’s Graham and His Portrayer, Max Shippee!