Violence explodes in these DAYS OF OUR LIVES spoilers! Locked up for a murder she didn’t commit, Gabi finds herself at the mercy of the other prisoners and suffers a vicious beating. Meanwhile, Chad is so furious to find Stefan in bed with Abigail, he may just kill him!

Gabi is struggling to survive in prison, and prays that Andre’s true killer can be found and brought to justice so she can finally go home. But she may not make it out alive! “Where the hell do you think you’re going?” asks one inmate as others circle around a frightened Gabi. And as one holds her down as another pounds on her viciously, the guards do nothing. Gabi falls to the floor, her face bloodied. Will she live long enough to be acquitted and set free? 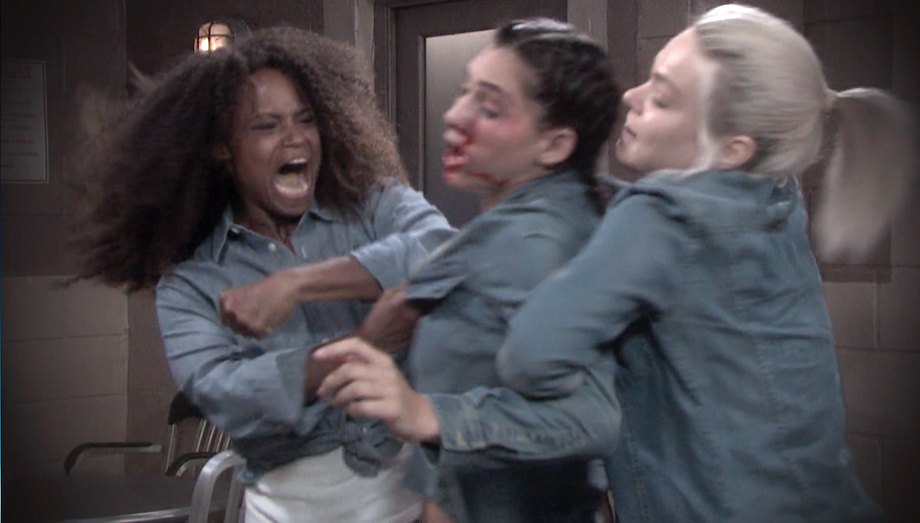 Gabi may not survive to be proven innocent! (Photo Credit: NBC)

Meanwhile, Andre’s real killer has just been caught… in bed with Stefan! Chad is so furious to catch Abigail after having had sex with Stefan that he doesn’t even stop to question why she would do such a thing. Assuming Stefan forced his way on her, Chad turns violent. “You’re gonna sleep with my wife?!” Chad yells, getting up in his face. “I’m gonna kill you!” Wearing her Gabi wig, Abigail screams at Chad to stop as he pounds brutally on Stefan, but there’s nothing she can do to stop him.

So when Hope says: “You’re looking at murder charges,” who is she speaking to? You do not want to miss this tease for the thrilling week to come, and for more DAYS previews, keep reading Soaps In Depth magazine!

Who Is Stefan O. DiMera?