After playing ONE LIFE TO LIVE’s Max on and off for 20 years, James DePaiva stepped out of the daytime spotlight. Thankfully he was ready for action again when GENERAL HOSPITAL invited him to play the mysterious Dr. Bensch a decade later!

While David has been making the rounds for almost a year, we still don’t know much about him — or his interest in a certain med-school student! With Bensch back on the scene and spending more time with Kiki, it turns out portrayer DePaiva doesn’t know any more than fans do, but he’s not complaining in the least. “When I played Max, I spent years being concerned about storyline, my position in the show, and all this other stuff,” he told Soaps In Depth of his OLTL stint. “I was fighting for the life of the character. I was so invested in it. And that takes its toll.

“I don’t have any of those worries now,” he continued. “I just get to go in, see old friends and play. Dr. Bensch is still unformed clay, and if it stays that way — with me just coming in and supporting everyone — I have no ego about it this time. So we’ll see where the writers and [executive producer] Frank Valentini want to take it.” 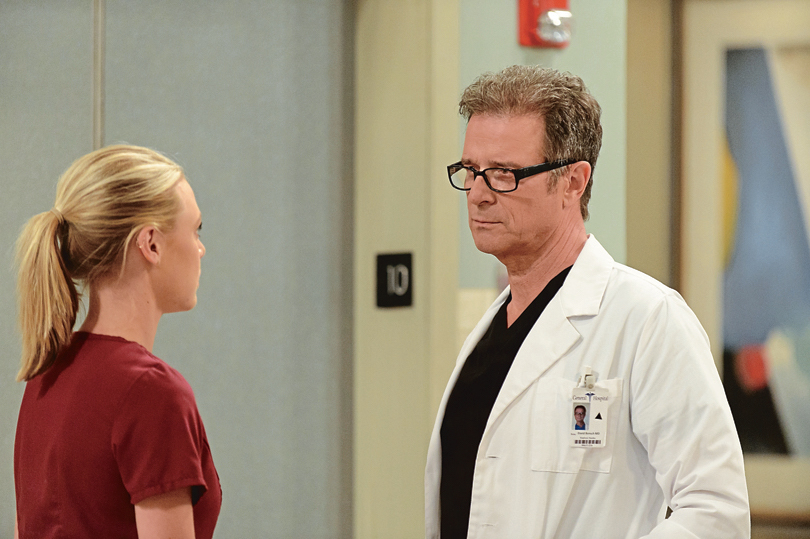 ”People have been known to fall in love with a big age difference,” the actor noted. (Photo Credit: ABC/Valerie Durant)

The question at the top of everyone’s list is what exactly is going on with young Kiki, whom Bensch has taken under his wing. “As I like to tell Hayley Erin, I’m old enough to be her very old father… but it would take another eight years for me to say grandfather,” DePaiva joked. “I love working with her. She’s such a delight. But does this turn into an actual romance? I’ve got no qualms about that. But I’m so far removed from all the love scenes and romantic stuff I used to play. The idea of making out with another woman doesn’t have any appeal to me, unfortunately. Before, it seemed like a nice job! Now, I’ll just take it as it comes.”

The one thing DePaiva does know about Bensch is that he’s a divorced doctor… who seems to have an eye for the ladies. “I think he’s hit on every woman he’s met — in a very polite and respectful way, of course,” the actor chuckled. “He’s always offering to buy Kiki dinner or inviting somebody to old movies.”

DePaiva’s not suggesting that his character is a sleazy player or ladies’ man. “He’s not looking for drama,” he maintained. “He’s looking for a partner in life. I just see an innate sadness and loneliness to him. That’s where I’m playing it from. Where the story actually goes, he could be Hannibal Lecter, for all I know!”

For more on your favorite GH stars and characters, keep reading the ABC edition of Soaps In Depth magazine!