Now that it’s officially fall, it’s time for Hallmark Channel’s Fall Harvest festival to begin and soap fans will not want to miss the new original Harvest Love which stars GENERAL HOSPITAL’s Jen Lilley (ex-Maxie) and Ryan Paevey (Nathan)! The romantic new movie premieres Saturday, Sept. 30, at 9 p.m. on Hallmark and Lilley offered up a preview with some backstage secrets in a special Facebook Live chat!

Lilley is best known to daytime fans for her run as Theresa Donovan on DAYS OF OUR LIVES, but she did fill in for a year as Maxie on GH. Unfortunately, while the character did end up marrying Nathan, Lilley and Paevey never actually worked together on the soap because Kirsten Storms returned to the role just before her new leading man joined the show! “So it was fate,” Lilley joked. “It’s great working with a soap actor because we’re always prepared and we always know our lines and we’re kind of not thrown by anything because we’re used to only doing one take.”

In Harvest Love, Lilley plays Luna Gilson, a young woman mourning the death of her husband (eagle-eyed viewers will notice that photos of Luna’s late hubby are actually of Lilley’s real-life spouse, Jason Wayne) who takes her son, Andy, to the family’s pear farm where she meets Paevey’s Will Nash, the farmhand who helps her open her heart again. “It was actually an apple orchard,” the actress reveals of the location where they shot the film. “So we had to put pears on all of the trees. 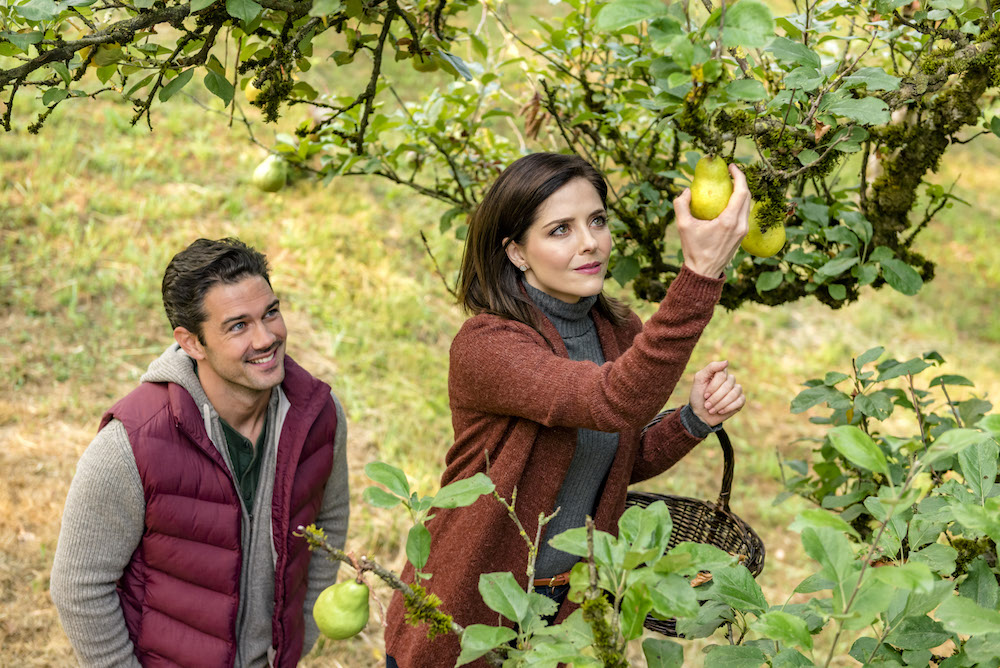 The movie’s star also revealed a surprising backstage secret about shooting on location! “It was funny shooting outside because I’m actually EpiPen-level allergic to grass,” Lilley confessed with a laugh. “So I had the medic, Laura, she brought me like, four Claritin a day and she was standing by with an oxygen tank and EpiPens, and we made magic happen, so it was great!”

Lilley insisted that viewers will absolutely love Harvest Love because it’s so uplifting. “I think there’s so much tension going on in our world right now that it’s nice to be able to sit down and watch a movie and know that you’re going to experience something uplifting. I love that.” Oh, and also, Paevey does something fans have never seen before! “Ryan Paevey does not dance,” Lilley chuckled. But Christie Will Wolf, the amazing director, and I, got Ryan to dance in the movie, so you should definitely watch just for that!”

And if you’re still not convinced, just watch this teaser trailer for the film followed by a sneak peek scene featuring Lilley and Paevey in action!

Kirsten Storms Opens up About Her Battle With Severe Depression

Steve Burton Promises “Great Things are Ahead” on GH