On GENERAL HOSPITAL, Robin has been through everything from an explosion to kidnappings — yes, kidnappings plural — and lived to tell the tale. So it makes sense that portrayer Kimberly McCullough calls her “my hero” and aspires to emulate her strength. “I don’t think I’m as tough as Robin,” the Daytime Emmy winner confided to Soaps In Depth, “but I am a tough cookie!”

Recent exposure of sexual harassment in the entertainment industry has rung bells for McCullough, especially with regard to growing up — along with Robin — on camera. “I remember a lot of what I got was ‘I can’t wait until you’re 18’ from other actors,” she confides. “I was incredibly naïve… I didn’t know that what they were saying was, ‘I can’t wait until you’re legal so that I can have sex with you.’” 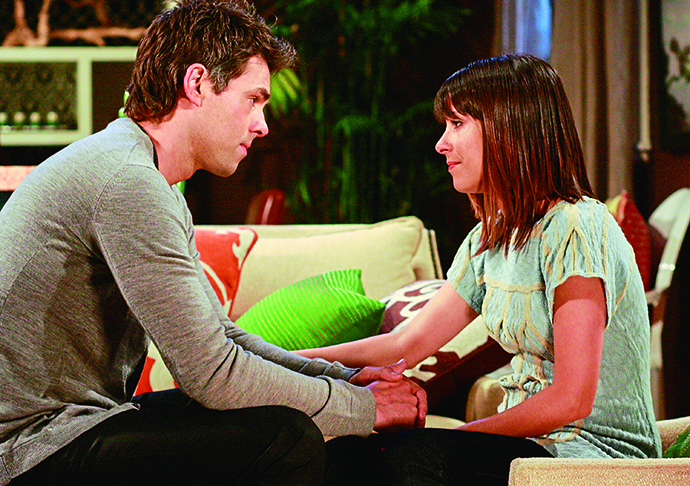 The actress thanks her mother for providing guidance and protection, but also recalls taking a stand for some things herself. “I was almost fired from GH because I refused to wear certain clothing and be sexual in my scenes,” she confessed. “It was a whole thing when I was 15 years old, and they hired someone who was 24 to be my boyfriend. They wanted me to do a make-out scene with him, and I refused.”

Today, McCullough is happy to still be welcome in Port Charles — even on a visiting basis — while also exploring her career as a director. She cites her recent experience of having son Otis accompany her to Utah (where she helmed two episodes of the upcoming YouTube Red series YOUTH & CONSEQUENCES) as being a true gem. “The showrunner called and said, ‘You do whatever you need to do — you breastfeed, you pump, we will make the time for you. I want you to feel very supported by me and the crew,’” Mc- Cullough relates. “That was incredibly generous of him, and it was the right thing to do. Because of that, I was able to do my best work yet as a director.”

McCullough was also behind the camera for the 10th episode of the upcoming second season of Netflix’s ONE DAY AT A TIME. “Multi-cam is shot the exact same way as a soap, so it’s in my blood,” she relates, adding that the difference is in correctly timing the jokes. “Rita Moreno, the show’s star, told me that I was a graceful director — I’ll take that compliment with me for the rest of my career.” When not working, McCullough is enjoying motherhood. “It’s equal parts wonderful and exhausting,” she shares. “You have to be creative and you have to trust yourself and just keep going!”

Tamara Braun Reveals Why She Returned to GH as Kim Nero