The June 11 episode of GENERAL HOSPITAL was not the first time that Maxie and Chase shared the screen together, but it’s the one that seems to have caused quite a few fans to decide that they wouldn’t mind seeing the two characters paired together! And for that matter, actors Kirsten Storms and Josh Swickard seem to agree!

“I’m happy you guys are liking my scenes with Josh,” Storms tweeted after the episode aired to a great response. “He’s adorbs and so much fun to work with! Great scene partner.” And in response, Swickard replied back with a string of heart emojis, which says it all, really! 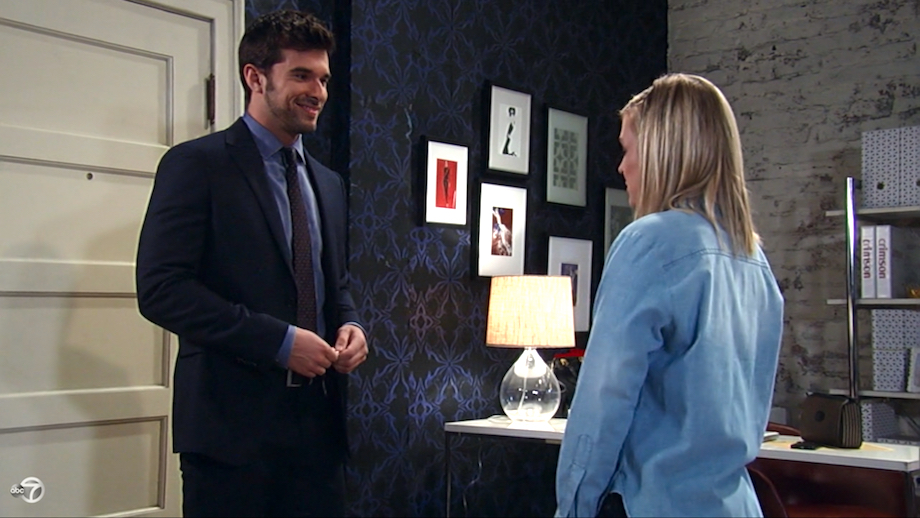 Could Maxie bring herself to date another cop, knowing how dangerous the job can be? (Photo Credit: ABC)

Maxie first met Chase back in February of 2018 when the Port Charles Police Department hired Chase to fill the slot vacated by her late husband, Det. Nathan West. And while Chase has clashed with Dante occasionally as he settles into his new role in the department, he and Maxie seem to be getting along just fine.

Still, Maxie only lost Nathan four months ago and she’s still grieving. Plus, she’s got their son, James, to take care of and she’s all on her own. So it might be a little soon for Maxie to even consider letting another man into her life. Especially considering what happened when she grew closer to Peter August! (Although there are still plenty of GH fans who would love to see them together…)

What do you think about pairing Maxie and Chase on GH?

Thankfully, with Chase’s connections to Port Charles increasing (in addition to his brother, Finn, he also shares a past with Nelle), he’ll be around for a while so there’s no reason to rush into anything. And since Kirsten Storms recently signed a new contract with the soap, GH has plenty of time to explore a new romance for Maxie whenever they decide the time is right!

So stay tuned to see how their stories develop (and possibly intertwine) and for more GH news, keep reading the ABC edition of Soaps In Depth magazine!