With two women on GENERAL HOSPITAL pregnant at the same time, fans have already begun predicting a baby switch storyline on the horizon, assuming that the scheming Nelle will lose her baby and replace it by stealing Maxie’s. But during an impromptu interview with Malia Karlinsky of Seattle Refined, Michelle Stafford had some fans worried Nina might steal Maxie’s baby!

The actress admitted that she enjoys her GH alter ego’s unique view of the world. “I love that Nina is fun and she’s somewhat childlike,” she confided. And despite Nina’s newfound stability, she also warned that the character may not have left her wackiness behind completely. “Nina is sort of becoming strong for everyone else,” Stafford mused. “I like the way that they’re writing Nina right now. I like this Nina. She’s really being there for her sister-in-law. And I think they might be toying with Nina wanting to take Maxie’s baby.” 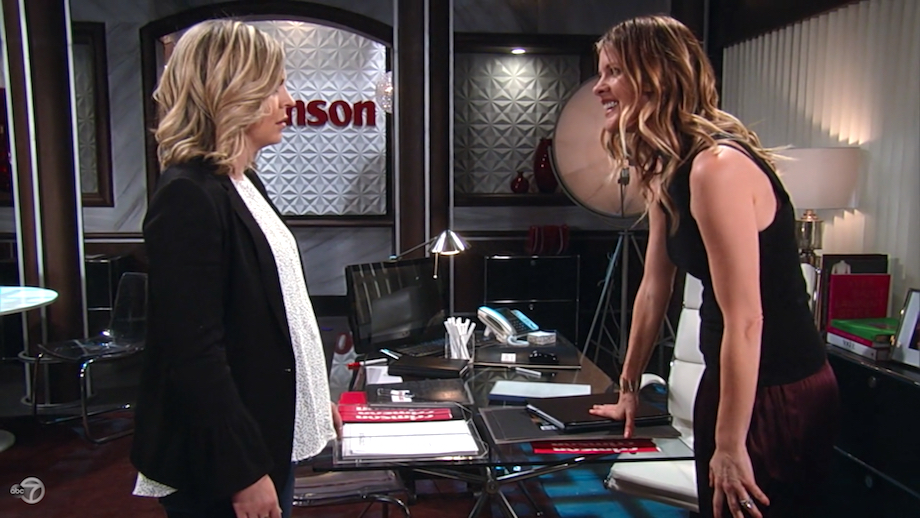 Fans are very protective of Maxie and her baby right now, so Stafford clarified on Twitter that she wasn’t serious. “It was a joke!” she tweeted afterward. Although, while it’s unlikely Nina would revert to her old ways and steal Maxie and Nathan’s child the way she did with Avery when Ava gave birth. It could be a very dramatic story if Nina felt that following Nathan’s death, Maxie isn’t in any fit state to raise a baby, and pursues legal custody of her niece or nephew. Especially if Maxie suffers from post-partum depression following the birth.

Nina seems to have gotten over her obsession with babies and seems content with being stepmother to Valentin’s daughter, Charlotte. And Stafford also believes that her character has turned a corner. “She had some issues that she’s addressed and now she’s okay,” the Emmy winner insists. So no more baby stealing!

See Steve Burton and His Wife Sheree’s Most Romantic Moments

ABC Exec Hopes to Have Genie Francis Back “Sooner Than Later”