After Harvey dropped the charges against Curtis, the P.I. and Jordan realized that the slime ball was illegally fracking natural gas from underneath Port Charles — which had caused the earthquake! Horrified, Ned tried to trick Harvey into selling the land back to him and then blew up at his associate. Harvey simply reminded the mayor that they were visibly linked, warning that nobody gets in his way. Ned was ready to abdicate his new position, but instead, Olivia hatched a plan. Curtis, meanwhile, searched Harvey’s place in Buffalo and found proof of the schemer’s illegal fracking. After Jordan arrived with news of just how bad Harvey was, they heard a noise… and found Betsy! Having been kidnapped by Har vey, she was traumatized — and desperate to bring Franco and Drew the truth.

Franco and Drew Fought for Their Lives!

Franco feared Drew was going to attack him for what he had done when they were kids. But it turned out Drew didn’t trust Harvey, either. Unfortunately, Elizabeth didn’t take the big reveal as well as Drew — after learning Franco had kept another secret, she told him not to come home! Crushed, he teamed up with Drew and tried to trick Harvey into giving him a lead on Betsy. Instead, Franco was hit by a series of flashbacks and froze, so Drew burst in… only to lose the upper hand and be carted away by construction workers. When the guys came to, they were trapped in a boiler room on Harvey’s site and cement was pouring under the door and filling the room. Though unsure it would lead anywhere, they struggled to break into a sewer drain in an effort to escape imminent death. 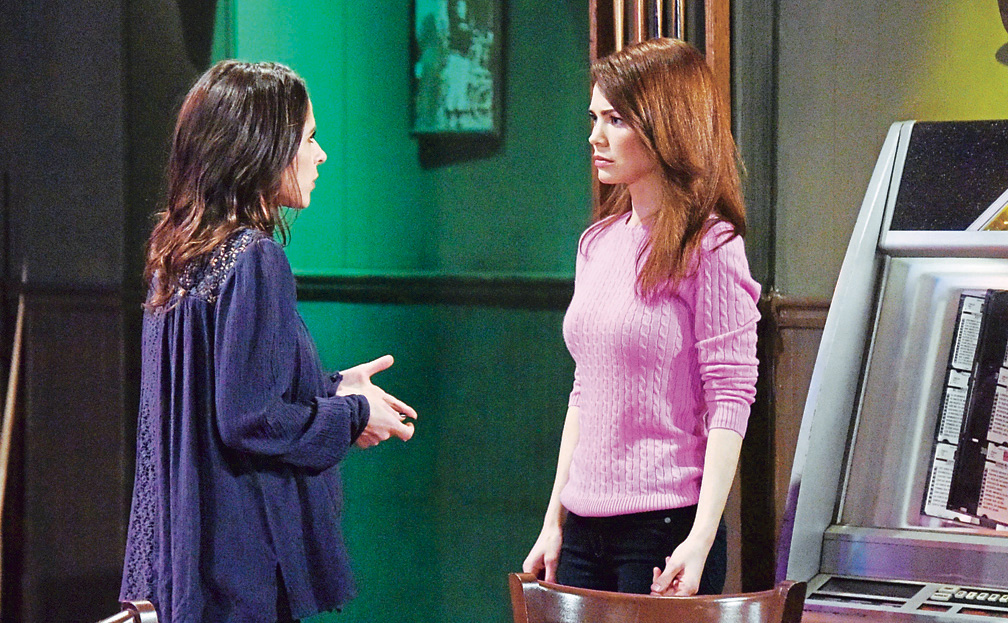 “You know, we both love men who’ve been known to kill on occasion. We really should be friends.” (Photo Credit: XJJohnson/jpistudios.com)

Sam and Liz Teamed Up

Spinelli finally got a lead on Faison’s envelopes that promised the keys to Drew’s memories and Henrik’s identity, so Jason brought the news to Aurora. After updating Sam, he also revealed that as long as she had feelings for his twin, he couldn’t be with her. An eavesdropping Peter was concerned to hear them so focused on finding Henrik, and Sam was even more concerned upon realizing that her husband was missing. At first, she worried Drew was avoiding her because he knew she was going to admit her feelings for Jason. But when she confronted Liz, they realized both their men were missing. The ladies went straight to Harvey, who claimed he hadn’t seen the guys — but Sam knew he was lying when she spotted Drew’s wedding ring. While Liz ran to inform Jordan, Sam stayed to spy and figured out where Franco and Drew were. Elizabeth then circled back and helped Sam escape Harvey… but when they got to the basement, it was already filled with cement! Unwilling to believe Franco and Drew dead, Elizabeth and Sam rushed to the PCPD to grill Harvey… only to run right into their wet, stinky but very alive men! Dante had brought Harvey down to the police department, but with his laundry list of crimes growing, the slimy dude somehow disappeared.

Finn Has a Brother!

Finn called Alexis to defend him when Julian wouldn’t allow Roxy into Charlie’s. Insisting the issue was his clients’ complaints and not his own jealousy, Julian called the police. Unfortunately, Chase’s arrival only made things more tense… because it turned out the new detective was Finn’s estranged brother! After Chase arrested his bro for throwing a punch, Alexis tried to help get Finn released. Kim and Julian later bonded over being in love with unattainable people.

Sonny and Jason realized the similarities between Mike’s situation and Drew’s still-missing memories. When Mike invited Dante to attend his appointment with Griffin, Sonny was upset that his dad seemed closer to the grandson he barely knew than to his son. Griffin couldn’t say how much time Mike had, but suggested Sonny make the most of every day. Meanwhile, Ava made it clear she wanted Sonny to give her full custody of Avery.

Griffin warned Sonny he was running out of time with Mike. (Photo Credit: ABC)

After Nina complained about Peter spending time with Maxie, Valentin warned the guy to steer clear of his sister-in-law. Of course, that didn’t stop Peter from sitting with Maxie while she awaited the results of her amnio. Thankfully, both her baby and Peter were free of Faison’s Huntington’s gene. While Maxie remained clueless about Peter’s real identity, Griffin’s curiosity was piqued, so he pushed Brad to do a DNA test. Unaware that Anna was searching for her son, Jason questioned her obsession with Henrik when he gave her a copy of The Severed Branch. Peter, meanwhile, let his publisher know that his novel was ready, while Maxie put a curse on Lulu’s happiness.

After using Leo to score points with Olivia, Nelle lorded her new living arrangement at the Quartermaine mansion over Carly. Unfortunately for her, Carly then told Olivia everything Nelle had done, turning the mayor’s wife against her. Enraged, the schemer ordered a replica of a scarf Morgan wore in a Facebook photo and bloodied it up. Then Ava — who’d invited Grif n to move in with her after his place was damaged by the quake — gave Nelle food for thought by waxing on about the joys of not having to manipulate her man. Nelle actually considered changing her game… until she saw Michael on a date! The mom-to-be was quick to let her competition know she was pregnant by and living with Michael and, even after he explained, Francesca walked away from the drama. Nelle, for her part, recommitted to her plan to make Michael need her. 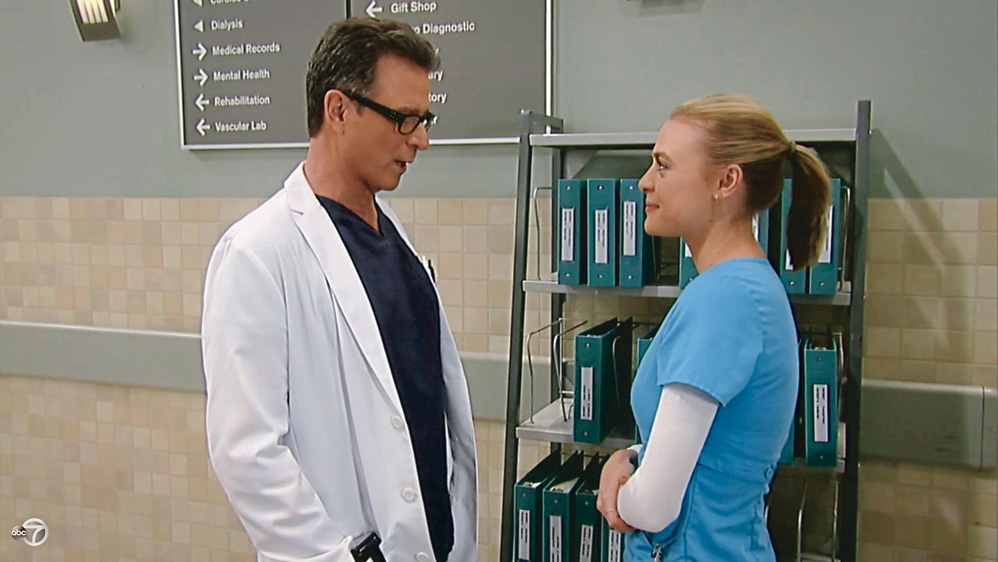 Despite getting a weird vibe from Bensch, Kiki accepted an invitation back to his office. After recommending her for a prestigious internship, he kissed her! The doc quickly backtracked, apologizing for misreading signals and insisting he truly believed in her medical future. They agreed to pretend it never happened, but it seemed he might punish her.

Vote for Your Favorite Hero, Heroine, Couple, and More in Our GH Anniversary Poll

GH Racked up a Lot of Daytime Emmy Nominations This Year

Everything You Need to Know About the New Nurse on GH