At her husband’s grave, Maxie lit into Lulu for sacrificing Nathan for her career. Peter defended his reporter, only to have Nina agree with Maxie. When a devastated Lulu later decided to hang up her press badge, Peter did his best to dissuade her. Maxie, meanwhile, fled from the reception and yelled at Spinelli for suggesting that she leave Port Charles. Left alone at his brother’s grave, Peter figured Nathan was lucky to have never known their father but was sorry Faison had still managed to destroy him. At the PCPD, Dante didn’t click with his new partner, Chase.

Diane called Anna, Jason and Drew to hear the contents of Faison’s will. Aside from a fertility mask for Anna, the madman bequeathed his entire estate to his son. He also promised that the twins would get the answers they wanted… once one of them was dead! While Sam suggested that she and Drew run an ad looking for the flash drive with his memories, Jason and Sonny considered using the inheritance to lure out Henrik.

Henrik Bonded With his Brother’s Widow

Spurred on by Robin, Anna told Maxie about the will, but the widow wanted nothing to do with Faison’s money, let alone his other son. Unfortunately, she was already bonding with him, because she had no idea that the man who’d saved her the night Nathan was killed was Henrik! Moved by Maxie, Peter decided to stay in Port Charles. The expectant mom, meanwhile, forced herself to start packing up Nathan’s belongings. Sam secretly kept a few things for her and tried to sympathize, but Maxie was too grief-stricken to hear it.

Danny Brought Jason and Sam Together

After considering Ava’s gallery for their wedding reception, Elizabeth and Franco took Jake to Kelly’s… where they had an awkward encounter with Jason. Encouraged by Robin, Jason played nice in front of Jake, then promised Franco he’d pay for what he did to Sam. After that, Jason had his first overnight with Danny — which didn’t go well. The kid got a stomachache and called Sam, who left her date with Drew to spar with Jason over their son. 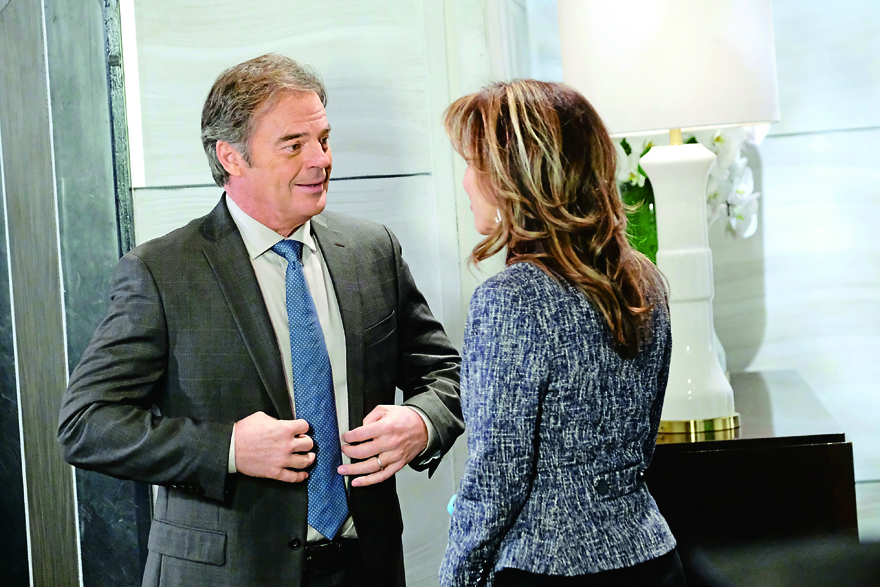 Ned was as surprised as anyone to find out that Alexis’ Mob ties were frowned upon by Port Charles voters. (Photo Credit: ChrisD/jpistudios.com)

Ned Won the Election; Alexis Won a Sleepover With Finn

Alexis was winning the mayoral race… until Harvey made a mysterious call and a new story in The Invader linked her to Julian. With things suddenly looking up for Ned, Finn comforted Alexis, while Harvey played dumb. Going on the defensive for his ex, Julian rushed the Quartermaine manse, but thankfully, Kim was there to stop him before he punched Ned. While a victory celebration broke out at the Q estate, Alexis gave her concession speech… and then went home and slept with Finn! Julian, meanwhile, was crushed to realize that, with the campaign over, he would be seeing less of Alexis.

Anna Took a Leap of Faith

When Anna pushed Valentin for more information about her daughter, he shrugged that there was no proof. Then he told Peter that he had his back! Unsettled, Anna visited Andre and shared her secret. She hoped that, with Faison gone and her child’s identity a mystery, it was safe to be with Finn. But Andre warned that secrets always come out. Nonetheless, she decided to go for it with Finn… only to find the doctor agreeing to plans with Alexis. When Anna and Finn learned that the WSB was honoring them for having toppled Cassandra’s cartel, he didn’t hide his tryst with Alexis. 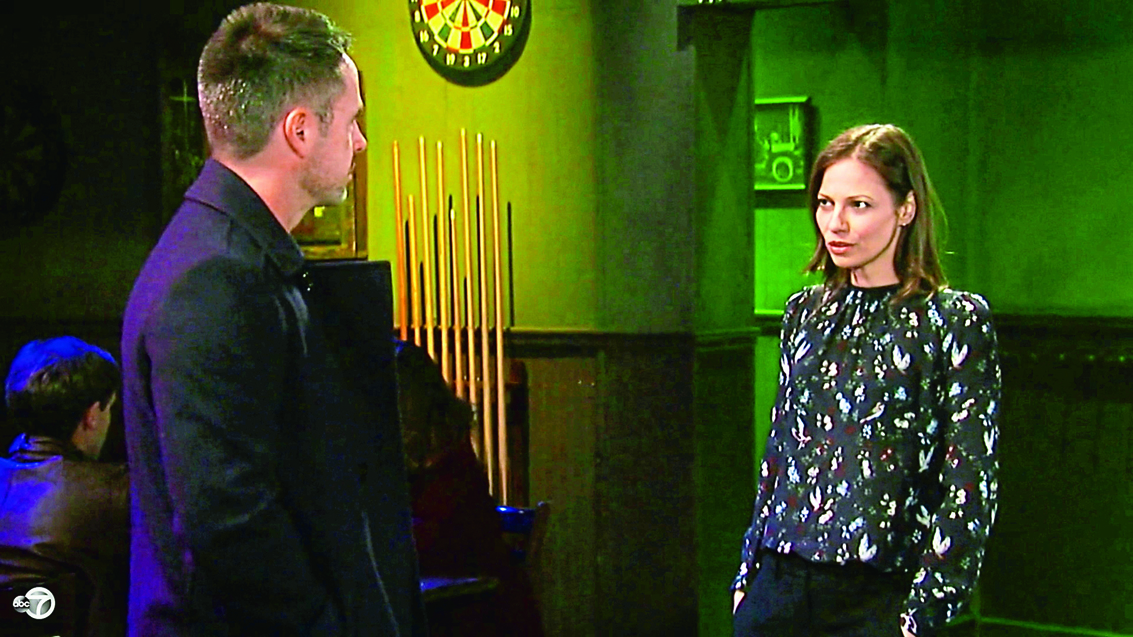 Julian charged Kim for her beer. But the flirtatious glances? Those were on the house. (Photo Credit: ABC)

After Oscar got a black eye for standing up for his and Josslyn’s friend, Kim learned about the kids’ alternative dance. When they asked Kim’s new friend, Julian, if they could have the event at Charlie’s, he was happy to oblige… but wondered what Carly and Sonny would think. Josslyn said she’d handle that end of things. Later, Kim called out Drew for teaching their son to fight. Oscar defended his father, but realizing he should have followed up after the lesson, Drew accepted culpability. Touched by her son’s growing relationship with his dad, Kim told Drew about a time when he’d fought for her. While his memories still eluded him the way Port Charles mobsters do the cops, Drew felt a sense of familiarity with her — as well as with Franco’s lucky rabbit’s foot and Harvey. After Curtis agreed that there was something sketchy about Harvey, he and Drew decided to track down Betsy for answers. At the same time, Franco met with Kevin and had another disturbing memory involving his childhood best friend.

When Kiki drunk-dialed Dillon and made a scene, Spinelli became concerned that she had alcohol poisoning. After she kissed him, he happily handed her off to Griffin, who tried to get her to bed. Of course, that’s when Ava showed up to find them tangled up in her clothes! She’d been planning to say, “I love you” but instead raged at her boyfriend for choosing Kiki. Arguing that it was a misunderstanding, Griffin begged Ava to spend the rest of Valentine’s Day with him, but she stayed with her daughter. The next morning, Kiki was grateful — and hungover! When she got to work, Dr. Bensch offered her some advice… and then seemed to overreact to news of her break-up with Dillon.

Nelle played it cool when Michael told her he’d decided to sell her apartment building — because she had a new scheme! Armed with a voice disguiser, she started making freaky calls to Carly. She also continued to play Monica, who not only told Carly the stress of their conflict wasn’t good for the baby but pushed the grandma-to-be to help plan Nelle’s baby shower. 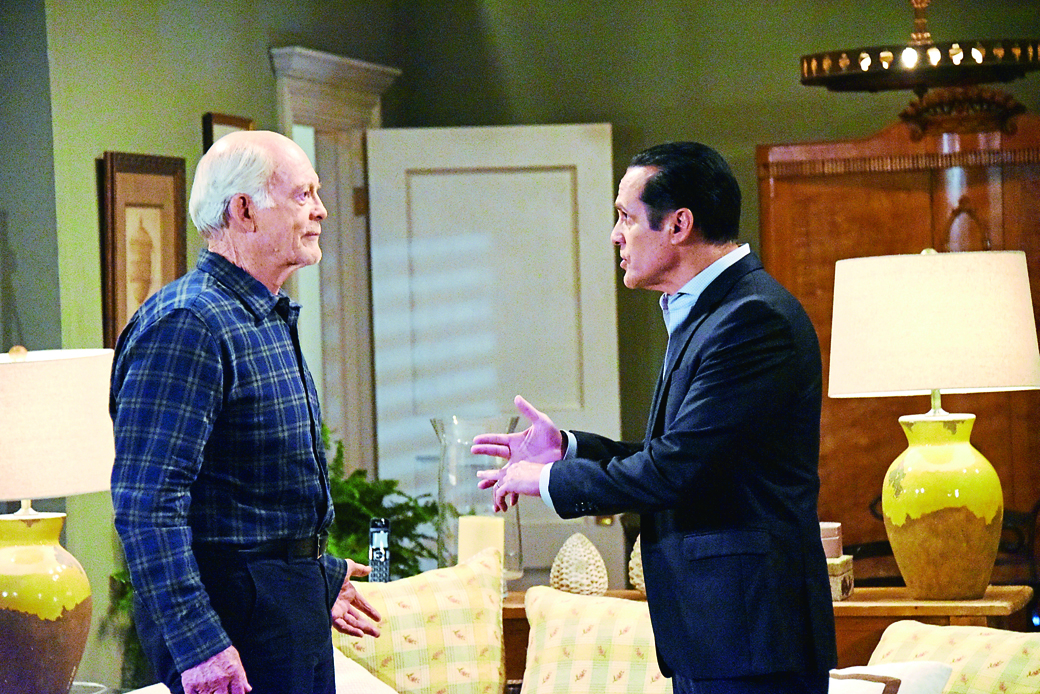 “Rules of the house: 1. Don’t ever phone the cops. 2. Don’t ever call me Sonny Boy… ” (Photo Credit: XJJohnson/jpistudios.com)

Sonny Brought Mike Back to Town!

Sonny brought his father back to Port Charles, only to have him disappear. As Sonny searched, Mike was serving coffee at Kelly’s, so a confused waitress called the cops. Upon realizing who the stranger was, Nelle informed Michael, who rushed over with Sonny to claim the clearly confused man. Forced to admit something was wrong with his father, Sonny took Mike to GH. After testing, Griffin confirmed that something was amiss with Mike’s memory — leaving Sonny to grapple with the prospect of caring for the father who’d never cared for him.

Everything You Need to Know About Nathan’s Replacement on GH

Why Nathan Had to Die