Lulu and Obrecht escaped Faison’s gas via Wyndemere’s tunnels, but the joy of their survival was cut short by news of Nathan’s shooting. Obrecht, Nina and Valentin rushed to join Maxie at GH and after surgery, Nathan came to… but once he’d felt his baby kick and pledged his eternal love to his wife, he died! As Port Charles dealt with this devastating blow, Robin came home to join her family in grieving.

The Truth Came Out

Anna was surprised Henrik didn’t show at their meeting, unaware that he was watching from the shadows. (As it turned out, Faison’s secret son was actually Lulu’s boss, Peter!) Wanting answers, Anna visited a hospitalized Faison, who referenced a Cassadine connection before losing consciousness. Anna got so emotional that Finn had to hold her back. Later, she was the one who protected Faison from Obrecht. Eventually, Jason got the villain to confirm he and Helena had pulled off the switch because they believed Drew would be better at following their orders. “Unfortunately,” Henrik had betrayed them and kept Jason alive at the clinic. After Peter (partially!) updated Drew and Sam, Faison offered more answers in exchange for his freedom, but they wouldn’t strike a deal. With the couple upset they’d been left out of the takedown, tensions between the twins got physical. Ultimately, Sam said that Jason could be a part of Danny’s life… but should keep his distance in all other matters.

Peter faced his father, sniffing that he’d saved Jason in the hopes the hitman would kill him. Peter took great joy in telling Faison that he’d killed his own son, Nathan. Soon after, Faison died! Anna tried to stall the search for his other son… because it turned out she might be the mother! She’d once given up a baby, and Valentin knew all about it. When Lulu pushed Peter about his past, he confirmed he’d never known his mom.

As Nelle got closer to Monica and helped Josslyn, Carly angrily threw the mom-to-be’s past in her face. Nelle responded with a slap… which Carly intercepted! Carly tattled to Michael, but also promised to step back. After bonding with Ava over the Corinthos clan, a scheming Nelle not only apologized to Carly, but revealed she planned to name her baby Morgan. 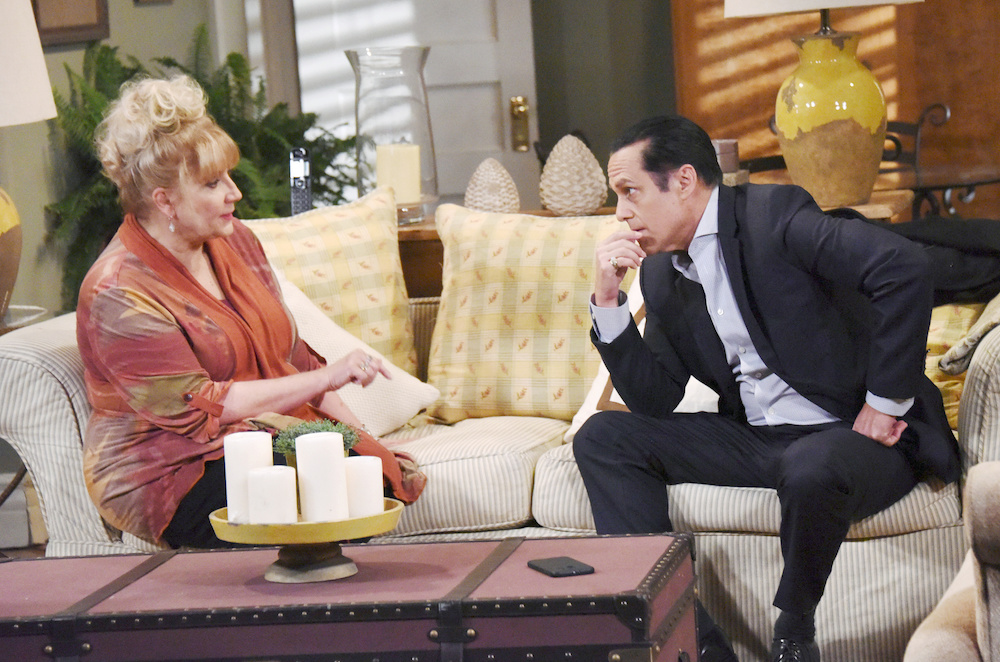 Sonny didn’t even have to unleash the dimples to get Rita to fill him in on Mike’s problems. (Photo Credit: XJJohnson/jpistudios.com)

After a worrisome call, Sonny went to see his father, Mike. The man’s terrified girlfriend, Rita, revealed that Mike was a bag-man for thugs and had apparently failed to make a delivery. When Mike eventually showed up, he swore he’d delivered the money, but then Sonny found it in a strange place. Rita admitted Mike had become distracted and forgetful, so after getting the money to the people it was supposed to be with, Sonny convinced his dad to come back to Port Charles with him.

After learning from Scott about Kevin’s murderous twin, Franco confided in the doc (who had expanded his study to include the dead). Franco worried about what his pushing Andrew down the stairs said about him, but confirmed that he had no dark impulses now. Kevin questioned why Franco would have kept the rabbit’s foot if he’d tried to hurt Andrew.

The Mayoral Race Heated Up

While helping to register voters in the Charles Street district, Stella was attacked. She fought back, and the guy claimed that she’d attacked him without provocation. Jordan and Curtis became suspicious of Harvey and Ned’s alliance. Things in the campaign got nasty when an ad began running which referenced Alexis’ ugly past with Julian. Finn tried to distract Alexis with dinner at the Floating Rib… only to have Julian and Kim show up! When both Alexis and Ned jockeyed for Aurora’s backing, Drew and his wife recused themselves, although Sam joined her mother’s campaign. Julian again refused to sell his restaurant to Harvey.

Mike’s Girlfriend Rita Is the Same Woman Who Helped Jason at the Bar in NYC!