Carly’s concern was not appeased when a homeless man by the phone booth offered a barely plausible explanation for the spooky calls she’d received. What she didn’t know was that Nelle had paid him off! With no proof, Dante couldn’t request surveillance of the booth but did take fingerprints. While Carly grappled with having been near the site of Morgan’s death, Nelle worked on Josslyn. She planted seeds about Carly’s strange behavior and conned Joss into thinking it was her idea to try and reunite Michael with his babymama. Nelle also made a new friend of Brad, who was excited to start the adoption process with Lucas.

On his wedding day, tuxedoed Franco fretted to Kevin over his recurring dream and concerns that Drew’s memories were returning — which made the doc wonder if they should bring him into their sessions. Then Franco ran into Drew… and found himself in a very familiar position on the stairs! This time, he lost his balance and fell, forcing Drew to help. That brought back more memories for Franco, who raced to confront Harvey — who confessed to being there when young Franco allegedly pushed Drew down the stairs! Franco put his suspicions aside to get to his wedding.

On the hunt for Betsy, Curtis searched Harvey’s construction trailer and learned someone had paid her bills before she skipped town. He also found a geological map of Port Charles. After Harvey demanded Curtis’ arrest and the return of his property, the PI told Jordan that Niagara’s land assessment went much farther beneath Port Charles than was necessary. Elizabeth, meanwhile, confronted Harvey about how Betsy had known to send wedding congratulations. The slimeball played dumb, but after she left, he called to reprimand someone for doing a stupid thing.

Over at Charlie’s, Julian and Kim prepared for the alternative dance organized by Oscar and Joss. But after Harvey’s ground-breaking across the street, sewage began backing up into the pub. The dance had to be moved to the Floating Rib and — with Drew, Sam and Kim chaperoning — it was a blast… aside from a bully Joss and Oscar had to handle. 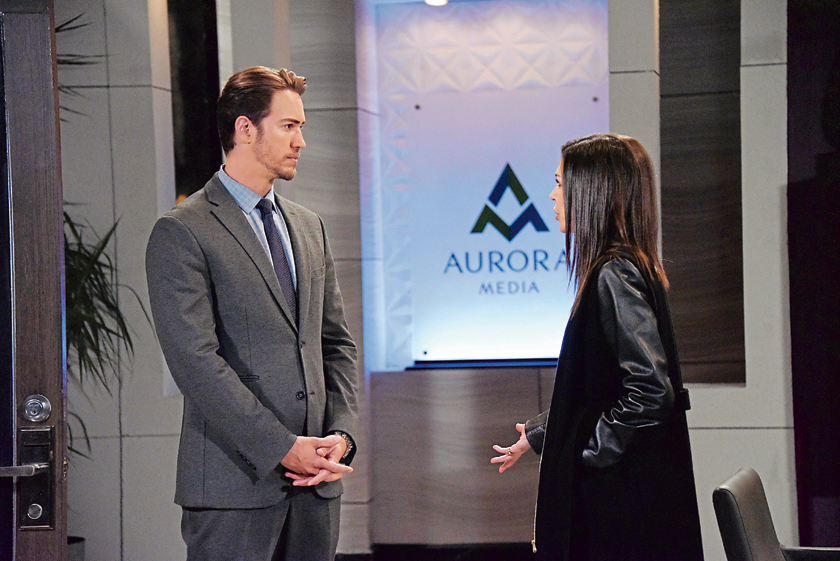 Peter and Anna have more in common than they think. (Photo Credit: XJJohnson/jpistudios.com)

Unable to convince PCPD newcomer Chase to release Mike, Sonny was forced to make a deal with Ava and let her see Avery. With Mike in denial about his Alzheimer’s, his family rallied around him… but Rita refused to be his caretaker and left. Dante, meanwhile, clashed with Chase — who was thrown to learn that his partner was a mobster’s son!

Faison’s Children Are in Danger

While continuing to bond with Peter over Nathan’s death, Maxie learned her baby might have inherited Faison’s Huntington’s gene. Peter feared he could have it too, while Anna realized she had to warn her daughter. The WSB agent teamed up with Andre to start the search in Brussels… giving Finn the wrong idea.

After Port Charles quaked, Mayor Ned stepped up to manage the crisis and locals fought for their lives. Ultimately, Michael was treated for a concussion, while Nelle was hospitalized after having contractions. After Oscar’s very close call, Kim was comforted by Julian — who’d saved Molly. While Ava was upset to have scratched her perfect face, Scotty was in serious danger after losing a lot of blood. Jordan couldn’t help but wonder if the earthquake was connected to Harvey’s project.

Amid the mayhem, Harvey left Franco for dead. After saving their nemesis, who ran off to find Liz, Jason and Sam were in danger as Harvey’s trailer dangled on a cliff! While fighting for their lives, Sam finally admitted she loves Jason!

Steve Burton’s Most Romantic Moments With His Wife, Sheree

Everything You Need to Know About Nathan’s Replacement on GH