This is it! These GENERAL HOSPITAL spoilers kick off the week-long celebration of the soap’s 55th anniversary, and you will not want to miss a single episode of the drama, romance, and excitement. Oh, and don’t forget about the memories — over five decades of them!

Port Charles comes together to celebrate its history, and their talented mayor Ned takes to the microphone with his guitar to thrill the crowd with a little number. Everyone is there to join in the party and toast to Port Charles’ past and future, including longtime residents like Monica, Bobbie, and Lucy. “Look around,” Carly suggests to Sonny. “There’s a lot of memories here.” 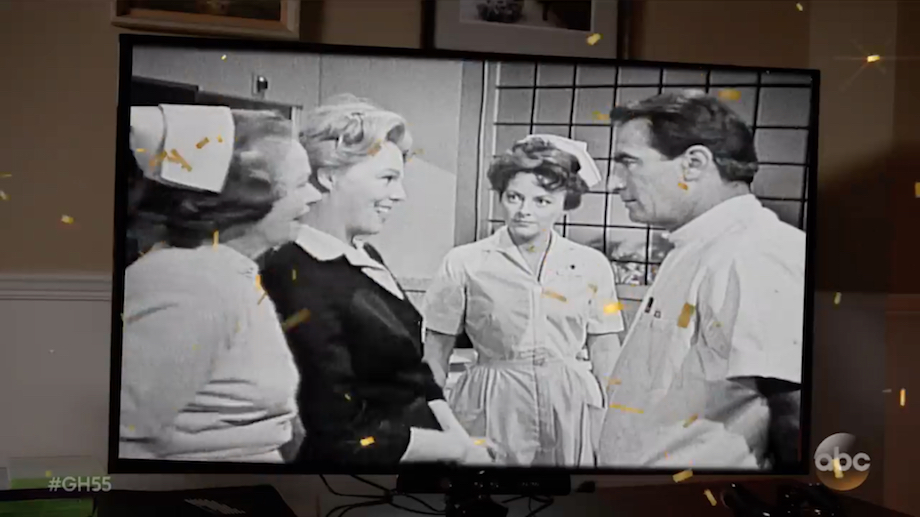 “I’m sure it’s going to be a lot of fun,” Audrey declared when she started work at the hospital. (Photo Credit: ABC)

And on a monitor, some of those memorable moments flash by, like Jason holding his newborn baby, Mac and Kevin dressing up as women, Alexis surprising Ned by wearing some sexy lingerie in bed, Scotty catching Laura’s bouquet at her and Luke’s wedding, Monica and Alan fighting, Robin running into Anna’s arms on the docks, and the classic hospital staff of Steve, Jessie, and Audrey preparing to work together for years!

As everyone celebrates over five decades of amazing memories together, Sonny raises his glass to make a toast. “May tomorrow be even better,” he declares.

Don’t miss this special tease for the week to come leading up to GH’s special anniversary episode scheduled for Friday, March 30, and to commemorate the milestone for yourself, don’t forget to pick up Soaps In Depth’s special GH Anniversary Collector’s Edition special, on sale everywhere right now!

Bid on GH Costumes, Props, and More in the Special Anniversary Auction